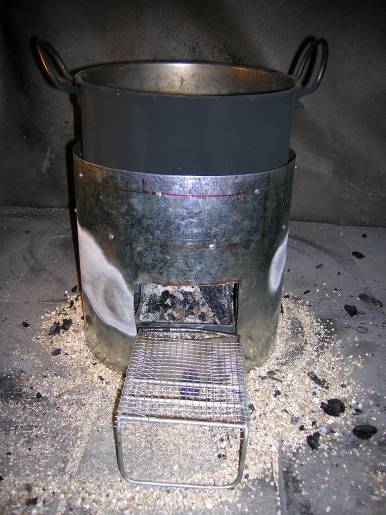 What is an Improved Cook Stove?

The 2007 Aprovecho Stove Camp is almost 1 month away! We have reserved a group campsite at Dorena Lake (where Dean keeps his sailboat) just outside of Cottage Grove. If you plan on attending Stove Camp, and would like to stay at the campsite (cheaper than a hotel, and much more scenic), please contact Jeremy at Aprovecho to reserve a spot. Total cost per person is $40 for 5 nights. We have the site reserved from 7-15 through 7-19. There are also hotels in Cottage Grove and Creswell for approx. $60 - $100 /night.

In an effort to understand the relationship between stove capacity and fuel use and emissions the performance of three sizes of rocket stoves were compared.

The stoves were tested with the 2003 UCB revised Water Boiling Test. Pots that were integral to the stoves were used without a lid. Kiln dried Douglas fir at approximately 10% moisture content was burned in all tests. Only one test was performed on the household stoves. Therefore, results are not statistically valid but should be useful for general comparison. The [attached] graphs show results from three Rocket type stoves as compared to a carefully tended Three Stone Fire.

-Video: How to build an Institutional Barrel Stove- Available for download or on DVD

As seen at ETHOS 2007, we have put together a step be step video on how to build Damon Ogle's design of an Institutional Barrel Stove. The stove is constructed from 200L barrels.

In a Controlled Cooking Test the Institutional Barrel Stove used 73% less fuel than an open fire!!

The video is available in multiple part downloads here on our website www.aprovecho.org

The video is also available on DVD for $10 + Shipping.

Q.
Dear Stovers,
The fuel magazine that sticks out the side of a rocket stove is divided into two: above the shelf is where the fuel goes, and air passes under the shelf. Am I right in thinking that the fuel should be packed in as much as possible, to try and minimise the amount of air entering the stove through the fuel inlet? If so, why? My experience is that char builds up at the bottom of the elbow, so air is needed to burn the char (which in turn pyrolises the fuel), and a second air supply is required to burn the volatile gases. Any pointers would be warmly received.
Confused, Hugh.