A lot of the folks on the List saw the Rocket stoves that we are making in China at ETHOS. John Page and I just spent ten days at the factory near Shanghai. Here’s a quick update on the China project.

The big news is that the lightweight, refractory ceramic combustion chambers are now being extruded at the rate of about one thousand per day. You can imagine that John and Dean were grinning ear to ear, watching the materials being mixed three times in the big grinders. When thoroughly mixed, the clay is extruded into the combustion chamber shape, pushed by a 100HP motor, and every twenty seconds or so, another combustion chamber is ready for drying. (There are photos of all this.) Drying takes about 30 days and then firing takes place in the huge coal fired kiln, as big as a supermarket. I think that we can fire about 20,000 combustion chambers at one go. The kiln is being fired and emptied simultaneously. The clay deposit is located one kilometer from the kiln.

The cast iron stove top was adjusted; raising the pot supports two millimeters, after further emission testing in the lab showed a reduction in CO and PM with a little higher clearance.

We have the first order for a container of stoves, which is going to India. The factory has arranged for a good set up price (about $600) for the packaging. The six sided box can be printed in the local language with desired designs and logos.

We are investigating shipping costs to and duties for all countries. There are different duties for whole stoves and for stove parts. We’re going to write up our experience and send it around to everyone, bit by bit, trying to share what we learn from this project.

You can contact me for the stove catalog, questions, etc… 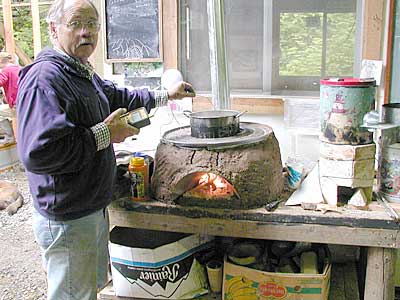 next to the river in beautiful Cottage Grove, Oregon.
The theme of Stove Camp this year is "Tuning TLUDs" using the emissions hood.
Read more

Stove Camp this year will take place August 4-8 here at the new lab which is on 4 beautiful acres with a nice river on two sides of the property. Folks are invited to camp here near the river! We will cook on wood burning stoves for lunch and dinner and bake tasty bread in a Rocket bread oven. We can have bonfires at night and figure out how to distribute one billion stoves.

Paul Van der Sluis from Philips may be able to attend. Friends in India are trying to buy and send us a BP stove. Can anyone in India assist them? I'll pay costs, shipping, etc.

Pam Baldinger, now in Darfur with USAID, very much supports this year's theme and contest. The team that cooks corn flour using the least fuel, etc. wins the more and more coveted Dr. Kirk Smith Cat Pee Award and $250! The most effective solutions will be sent to Pam.

Let's prove that cooking with wood can be done with very little fuel! It's important! Let's help refugees.

ETHOS Stove Camp costs are:
Instruction/Participation: $100 students $200 others
Camping (5 nights): $25 students $50 others
Five dinners cooked here with wood on Rocket and other stoves: $25 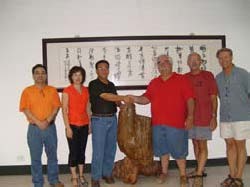 Officials from Shengzhou Stove and Aprovecho Seal the Deal