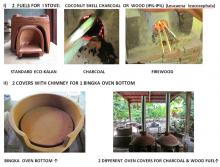 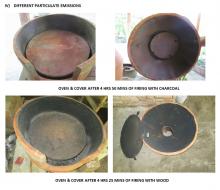 Eco-Kalan has adapted their Binkga Oven (named ofter the rice cakes that the ovens make) to use both locally available coconut charcoal and stick wood fuel.

The system uses the same oven bottom, and two different covers, one for wood and one for charcoal. Both ovens can bake high quality Bingka rice cakes, but with two different levels of particulate emissions. (Notice the soot on the wood fired oven). However, both ovens are cleaner than the hornohan stove that Eco-Kalan would like to replace.

The Bingka Oven works over a range of cooking temperatures (325 deg. F - 500 deg F) and has can cook both bingka and torta breads (with or without filling). Rebecca is anticipating that it will also work for a wide variety of other baked goods.

They have demonstrated the oven for local parents, teachers, government officials, and others. They have also reached out to people who work with remote communities that in the mountains. The first commercial production will target bakers who are preparing the bingka and torta on the more common and smokey hornohan stoves and anticipate the newer stove will give these bakers the ability to make high quality goods with lower costs and improved health.

A recent assessment conducted by the Women’s Refugee Commission in Haiti found that the price of charcoal has risen by 40% (WRC and WFP 2010). Helping subject populations to develop the capacity to produce liquid biofuels may offer one important solution to energy poverty in Haiti’s displaced communities and contribute to its long term development of energy self-sufficiency.

Project Gaia has been working in Haiti to promote ethanol and the CleanCook Stove - an alcohol based stove - as an alternative to stoves that burn solid biomass (i.e. wood, charcoal, and briquettes.) Ethanol is as clean as LPG, cheaper than charcoal, safer than kerosene and has greater potential than trash briquettes. In Africa, Project Gaia has accumulated over 2 million days of cooking with the CleanCook Stove without a single accident of any significance.

The most common question which arises during our discussions with policy makers and social entrepreneurs is:** “Would the supply of ethanol be sustainable? And where would the supply come from after donations were at an end?” **

This is the key sustainability question and the reason why we are so interested in Haiti. Not only was Haiti once a leading sugar producer and a distiller of beverage ethanol for export as well as the local market, but also Haiti exists on trade routes over which billions of liters of ethanol flow each year on their way to a fuel market in the United States. This ethanol, mostly from Brazil, generally the most competitively priced in the commodity market, will provide a source of fuel for Haiti—cheaper than kerosene—as Haiti builds up its own local production (Ethiopian Petroleum Enterprise Data). In fact, the Brazilian Government has pledged to donate over 100,000 liters and an additional 400,000 liters over the next two years.

Haiti was once a powerful agricultural economy, producing for its own needs. In 1983 Haiti harvested 70,000 hectares of sugarcane. Today it harvests less than 17,000 hectares (Figure 1: Decline in Sugar Cane Production (UN Data World Statistics Pocketbook)). Haiti’s dependence on export markets has increased its vulnerability through its reliance on basic sustenance items it once produced locally. Today it supplements most of its own food staples with imports – a precarious equilibrium. Other than charcoal, most other fuels are imported.

In regards to domestic ethanol production, Haitians are no strangers to the distillation of alcohol. Thousands of small mills and distilleries make beverage-grade ethanol in Haiti. In Léogâne alone, over 200 small distilleries were in operation before the earthquake (ESMAP 2007). Many of the existing distilleries in Haiti, those shut down or still in operation, could be repaired and refurbished to produce fuel grade ethanol. Project Gaia has been in contact with an operating distillery in the vicinity of Léogâne that could upgrade to produce hydrous ethanol fuel and put this fuel into the market in a matter of months.

Many opportunities exist for small scale distilleries. In Haiti, some small ethanol enterprises are already active thus presenting the perfect opportunity for value chain development through the support of SMEs (small and medium enterprises). The number of sugarcane transformation workshops throughout the country is an estimated 5,612 (ESMAP 2007)

Haitians rightly believe that Haiti’s way back from dependency is through agriculture and a renewed attention to domestic needs and markets. Therefore, by developing ethanol as a household fuel, it will profoundly benefit Haiti because Haitians can produce biofuels from their own agricultural crops. Moreover, Haitian families will finally have access to cooking fuel that is safe, clean, affordable and sustainable. A way back to economic - and human - health for Haiti is to produce ethanol for its domestic energy market.

It was not quite 9 months ago, when I sent out an email to a small group of collaborators, with a Subject line that asked the question: "How do we get biochar stoves to Central America?" Of course, like the punch line to the old vaudeville joke, the answer is "lots of hard work". I could not have imagined 9 months ago was how rewarding all that work would feel. I want to share that feeling with all of you.

I recently returned to Seattle from Costa Rica's famed coffee producing area the Santos Zone. This was my second trip since mid- January. I have been continuing my work as a technical consultant to a clean stove/biochar project. Proyecto Estufa Finca (Farm Stove) was initiated by organic coffee farmer Arturo Segura http://www.solcolibri.com/ and the members of the local citizens group APORTES.

Sebastian Africano was just through the SF Bay area, building stoves on his way to Stove Camp, and I added this post on his workshop to my evolving IAP site: