Ethanol stills use coal or wood, coal is not sustainable, and wood is vanishing fast. As for coal it is now being imported because local production and availability of wood is not able to keep up with demand and because much of Haiti is deforested. All fuel options underwent a 50% price hike following the earthquake. In ascending order of use the most common fuels are propane, kerosene, wood and coal. 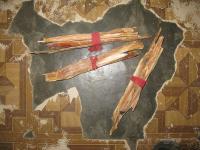 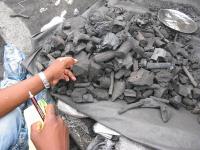 Port au Prince uses 80% of all the coal consumed by Haiti. Wood, prior to the earthquake, was used mostly in rural areas but in many of the camps that we are working in we’ve noted more and more people using wood in their charcoal stoves. Kerosene is very expensive and used not for meals but for quick things like eggs or reheating precooked food. Following the fuel cost hike, however, I have seen more and more of the kerosene stoves gutted and transformed into small charcoal stoves by removing the tank and burner, pounding holes in some sheet metal for form a sieve to hold the charcoal and placing either a pot on the coals or using the rack or radiator from a refrigerator as a grill. As for propane it is used but the families in top 3% of the economic ranking.

Regarding cost it is important to note that the drop in earning options and the spike in fuel costs now means that most of the displaced families now must spend 40% to 60% of the daily family income just to purchase fuel to cook with. In many cases this has meant that families have gone from eating two or three times a day to once a day even in the areas where WFP/PAM is sending distributing food.

What Other Options do we Have?

We could use fuels directly in the stoves which is one of the reasons I like gasifying stoves (fuel too small to use in a standard stove can be used in gasifying stoves); unfortunately the ability of gasifying stoves to use almost any biomass often creates misconception that all biomasses are the same. Users become disappointed when rice husks are used up faster than oak chunks. To avoid this I see briquettes and pellets as the best options. They are more consistent, clean to handle, low-cost, and perceived as a more modern fuel. This last is particularly important because many people are well invested in the “fuel ladder” and if they have already made the perceived social economic move forward (from wood to coal) they will not like to switch again unless it is to move up another rung. Marketing will be key to show that pellets and briquettes are a newer more modern fuel, it is important that pellets and briquettes not be viewed as taking a step back since they are made with “poor” materials.

1. What is the fuel offset by using the pellets? Is it 50% savings compared with wood?

wood fires here are either three rock stoves or charcoal stoves now being used with wood because many can no longer afford charcoal. efficiency is between 7 and 12 %maybe 20 % with some practice. pellet stoves require some training but then run themselves well and may be as much as four times more efficient. if you consider that 1kgofcharcoal produces here is really 7kg of trees the savings both economically and environmentally could be staggering

2. How much imported charcoal does it offset?

right now just one NGO's food program requires the use of 600,000 kg of charcoal a day, that's 1,800,000kg of CO2 per day give or take, right?and that is only one NGO hot meal program, put all the AID groups together and the numbers get big mighty fast

3. What are the relative costs of imported charcoal compared with pellets?

for now, thanks to Green Circle BioEnergy in FL we are providing free pellets to the people using our stoves. in general charcoal costs between 40% and 60% of a family's daily income. Daily income is about $5 US.

4. What is the benefit in number of meals from donated pellets? How may families could cook more than one meal per day by using donated or subsidized pellets as a transition fuel?

Green Circle Bio Energy's generous donation of 60 tons will provide 145,000 to 148,000 family meals, or feed about 740,000 people each once.
I strongly encourage other pellets producers to follow Green Circle's lead and in the mean time am working with the UN to see about funding regular shipments either weekly or biweekly to Port au Prince for the foreseeable future.
As a happy plus we have teamed up with three local ag and aforestation groups who will use the biochar produced by the stoves to restore soil carbon and help areas at risk of becoming desertified.

What Feed Stock Options are there in Haiti?

Feed stocks vary widely through Haiti but in the interest of simplifying logistics and keeping transport costs to a minimum I recommend that local pellets/briquette production be made using local materials. Clearly this means each small pellet mill or briquette press will have a specific optimal mix. UNDP and the Clinton Foundation have done a fine job with this concept and their briquette plant is now in its third year of operation. The use the Work for Pay model developed by UNDP for the collection of paper and cardboard throughout the city. 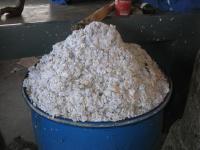 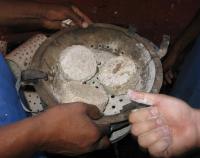 These are then soaked in large drums and pounded in enormous wooden mortars to archive a consistent slurry prior to pressing. I would recommend the additional purchase of a hammer mill or two to accelerate production. We have measured a wide difference in hardness of the briquettes which makes the use of them harder to learn. This could easily be fixed with a grading protocol prior to the sale of the briquettes or controlling the pressing and packing procedure of the press.

Pellets would have the advantages of ease of use, faster production rates, no drying period (during the dry season the briquettes require three days to dry but during the rainy season drying can take as much as a week) and a wider variety of feed stock options to provide a more energy intensive fuel.

Around the quake affected region the feedstocks we have tested over the past five weeks have included, bagass, rice hulls, coffee hulls, bamboo, sawdust (many mills are working overtime to provide wood for shelters), chadek rinds, coconut shells and husks, mango cores, palm fronds, sugar cane, sugar cane shavings, paper, cardboard (personal thought, much waste has been generated during food and aid distribution, it would be nice to be able to use all of it so as not to leave a littered city in our efforts to help). All larger wood was used following the quake either for building shelters or to cook with. 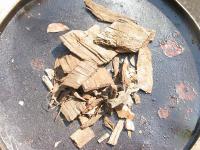 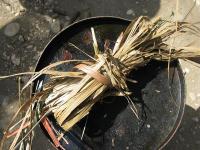 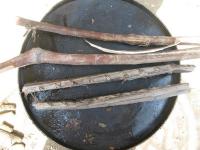 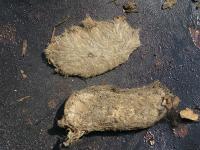 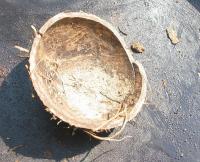 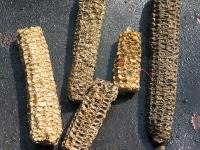 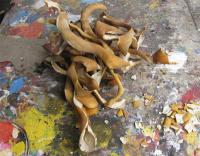 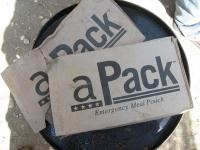 My favorite has to be chadek rinds, which by themselves produce a spectacular blue flame in the Luica Stoves. Chadek are large pear-shaped citrus fruits. And the rinds are saved as fire-starters.
Bagass poses some challenges in that the gas it produces often has sugars in it that do not always burn. This was not the case with the denser sugar cane shavings or the full cane chunks. Which leads me to believe that bagass, once pelleted would also function well. This, if verified would be a fantastic feedstock in that it is by far the most abundant in this area with mountains of it just sitting throughout the region.

Out side the quake affected areas there are a great many other feedstocks and the energy balance must be carefully made to see if any of these would make sense. From what I have seen vetiver grasses are clearly the most promising feed stock option followed closely by banana plantain plantation and processing waste.

Where to go from here?

For the short term and immediate future the best solution would be to import pellets. While the thought of importing fuel may cause some reservation it must be noted that current aid programs are importing charcoal to cook the food that is being distributed. Current food distribution of rice alone requires a daily supply of 600,000 kg of charcoal. Larger camps are importing propane. If the aid effort is already importing fuel would it not make sense to import more environmentally compatible fuels which at the same time would help sensitize Haitian stove users about a new fuel which could be sustainably 100% Haitian produced? We have enough pellets for the school feeding programs and some camps for the near future but a steady donor supply would be key as we work with WFP to establish up to 30 local pellet mills throughout the Port au Prince area.
Other askes could be small mills for schools, shipping and logistics help with donor pellets (getting the first shipment was a nightmare)and experts or pellet producers willing to consider production in Haiti, the market here is ready and the need for jobs here is great.

As for our stoves we are currently producing three types of stoves:

Photos of all three are attached (please note on the large version that the local artisans we are working with insisted on decorating it with trees and birds saying they had to because if people use these stoves the trees will come back to Haiti and then so too the birds. 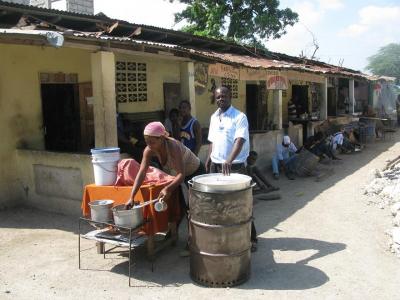 Green Circle BioEnergy http://www.greencirclebio.com/
2500 Green Circle Parkway
Cottondale, Florida 32431
who would like to thank the following for their help:

Cooking With The Aprovecho Rocket Stove in the Marshall Islands

Frying with a little copra and udak

Palm Fronds as Fuel in a TLUD (Top Lit Updraft)

Remember in the rocket stove I am use very "pulpy" stuff.
In the TLUDS-- XL Woodgas and my tincanium ones--- they make charcoal. As for shell I have not tried it much yet in the TLUDS althought my son burned out the first XLWoodgas unit on it.

In industrial applications like a bakery I am sure shell would be fantastic if you could get enough.I think everyone else would get it first 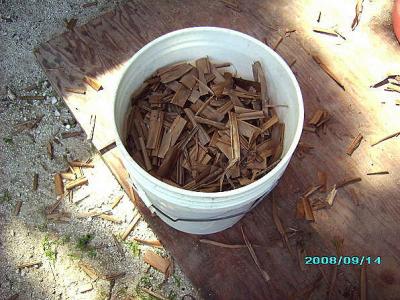