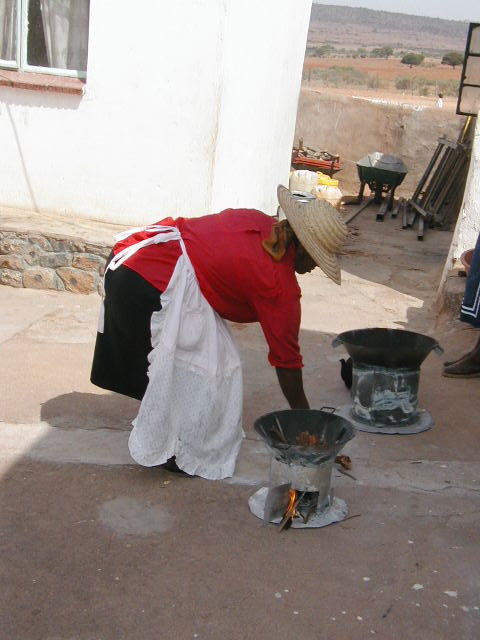 I have heard from Vivienne in Polekwane, Limpopo (Pietersburg, Northern Province to you oldsters) about the testing that went on in a rural area newer town.

They tested our Shisa Stove which they called the Swazi Stove. They also had a Mali stove modified to accept local pots (far bigger firebox apparently),a Rocket Stove and the 2-pot EcoStove that was at the Summit in JHB.The Eco stove was pretty efficient. It has a Rocket Stove firebox on it and two pots + and oven. It was the only one that came close to the efficiency of the Swazi Stove. That was for one pot only. The second pot would not boil although it did get hot. They also baked something but she says the fuel consumption went way up when they tried. It took 30 minutes to get the oven to temperature asnd she described the efficiency as 'low'. The Eco
is a stainless steel stove which costs about $50 to make.

The Rocket Stove used about 1.5 to 2 times as much fuel to cook a meal as the Swazi Stove. We all know it is pretty clean burning. No surprise there.

The modified Mali stove apparently was a failure and was not tested much.

They also used a 3 stove fire to cook a meal. The meals were a stew and maize porridge in two pots either cooked together or in sequence.

The Swazi Stove used about 1/3 of the wood of a three stove fire. A variety of pots were tried and apparently it was not that 'scientific' in its approach so the comparisons are perhaps not all that valid. The fuel used in the Swazi Stove was 100mm pieces of 60mm diameter wood of different types.

They settled on using one piece to simmer and 2 pieces to boil. The control over the power output was significant. They ran it wide open, the went to 1/2 air and then low air to simmer.

They ran 4 tests (cooked 4 meals) on the Swazi Stove which consumed 1.2 kg, then 1 kg, then 0.84 kg, then 0.8 kg of wood. She said that as they got used to using it they could make better decisions about when to add fuel
and how much, so they used less wood the more experience they got (it was their first time to use a stove like this). When they put in too much wood so that it touched the bottom of the pot, it smoked. Otherwise it was well
behaved.

The Swazi Stove produced between significantly less charcoal than the other stoves - about 1/4 as much, usually leaving 20 to as much as 40 grams.The others were 100gm +.

They cooked one pot of water (2 litres) using dung only, bottom lit. It reached a rolling boil in "less than 10 minutes" at full power at which time they turned down the heat and let it simmer for another 20 minutes. A rough
calculation of the efficiency shows it to be something like 33% burning dung.

The efficiency of a dung fire can be from 5% to perhaps 10% if it is very well managed. This is a remarkable increase for such a lowly regarded fuel. Two elderly ladies were impressed no end by the dung fire as they knew
very well what the fuel was normally like. It did not smoke at any stage during the firing.