we had developed, during the 1990s, a series of mud stoves, which not only possessed a higher fuel use efficiency but which also reduced the harmful emissions when compared with the emissions from traditional stoves used by the local people. They are made and sold even today by rural artisans trained by us. The cost is in the range of US$2 to 5. In 2003, the Shell Foundation came forward to support our stoves programme, but we had to stop promoting our own mud stoves, and we were allowed to propagate only models approved by Shell Foundation. The approved models had much lower emissions but they carried a price tag in the range of US$15 to 25.

One of the conditions laid down in this project was that the stoves must be propagated through commercial channels, without subsidy of any kind. We failed to achieve the targets set under the project, and because of this reason, Shell Foundation withdrew their support. We still sell the stoves approved by Shell Foundation but our clients are not the rural poor.

We have not given up our efforts to improve the performance of the simple mud stoves. The latest attempt is a model in which the body of the stove is made of a porous material, which has a high insulative capacity. The emissions are much nearer to internationally accepted standards. This stove costs about US$10, and if mass produced, it can be supplied at a price of about US$6 to 7

Commercialisation of Improved Biomass Fuels and Cooking Devices in India: Scale Up Project

Indoor Air Pollution (IAP) is a major health threat for women and children under 5 in the developing world. According to World Health Organisation, annually, 500,000 women and children in rural India die prematurely due to diseases linked to long term exposure to IAP. A major cause of IAP is smoke in the rural kitchens, due to use of traditional biofuels (firewood, agrowaste, dungcakes, etc.) in traditional cookstoves. Economic constraints of rural households and poor distribution network of modern fossil fuels such as kerosene and LPG, result into the rural households continuing to depend on locally available and free-of-cost or cheap biofuels. Therefore, a more practical solution is to develop and disseminate biofueled clean cooking devices.

Based on the lessons learnt from the pilot project, the scale up project aims to reach out to about 15,00,000 rural households in Maharashtra and around 50,000 rural households in Gujarat. It is envisaged that this project will successfully establish sustainable business chains for supplying the clean biomass energy cooking products the rural population in Maharashtra and Gujarat states. This will be achieved through active participation of rural entrepreneurs, Self Help Groups (SHGs) and Non-Government Organisations (NGOs). ARTI, with its long standing experience in development and dissemination of rural technologies, will drive the synergetic working between the various NGOs and entrepreneurs. 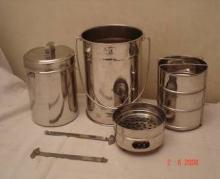 Sarai is a stainless steam steam cooker. It is a non-pressurised cooker, into which you put about 150 ml of water and then lower into it a wire cage, which holds three cookpots, one on top of another. The steam pot has a lid which is kept closed while the food is being cooked. The heat is provided by a charcoal burner, which is designed to hold just 100 g of charcoal or a single honeycomb briquette of 100 g. After the coal has caught fire, the steam pot containing the food to be cooked is placed on the stove.