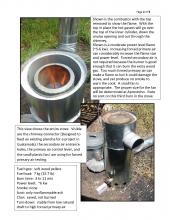 Attached are some drawings of a stove I have been working on. I hope at least some of you will enjoy looking through it. My design concepts are a bit odd, but they work. 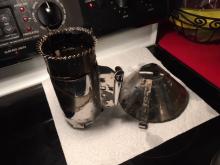 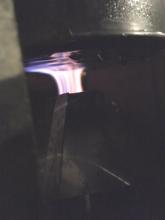 I have built the ELSA stove that's
documented here, https://www.youtube.com/watch?v=55r5DmvT3XE .

I started with a stainless steel trashcan that had seen better days. I
unrolled it and glued on ELSA stove blueprints from the web. Then I cut out
the shapes with a 24 tpi bimetal blade in a jigsaw.

I don't have an anvil, or the sheet-metal "curling" tool (is there a name
for it?) that is shown in the video. I bent the metal over some angle-iron,
and I made the tool from some stainless tubing I bought at the hardware
store.

I couldn't get the stove to light until I used the lighting cylinder, which
is shown in the video, for some extra draft. I used brown packing paper as
tinder, and wood pellets as fuel. 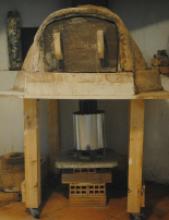 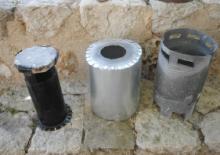 For Marc's excellent writ-up download the pdf TLUD-OVEN Description
These are some quick notes:

He has made some changes to the TLUD style oven

The Low Thermal Mass oven is based on the Haiti Rocket oven http://www.rechoroket.com
To see more pictures of the TLUD oven and the process of construction go to:
http://cuinessolars.jimdo.com/forns/

In the Oven Temperature graph, you can see the complete temperature profile. Marc did a side by side comparison of both a 20cm reactor TLUD and a smaller TLUD, with 12,5cm reactor.
"Note: the temperatures refers to the inside side of the wall oven, half way between the baking surface and the top hole. Note2: the temperatures were taken by a temperature datalogger and a type K probe."

For those interested in using coconut husk (not shell)
Unprocessed coconut hulls make lousy fuel.
Coconut hull fiber are generally know as coir.
http://en.wikipedia.org/wiki/Coir
It is a big business in India.
http://msme.gov.in/Chapter%206-Eng_200708.pdf
The fibers are processed into mats, carpet backing, potting material, and geotextiles (for erosion control).
On a small scale, the hulls can be soaked in water for at least a month and beaten to break the pith and used as mulch.
The pith leftover from fiber production is known as cocopeat.
http://en.wikipedia.org/wiki/Coco_peat
It is generally a coarse powder. It can apparently be made into fuel pellets for gasifier stoves. See attachments.
Bob
Air Max 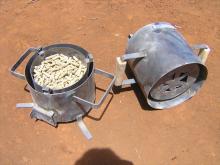 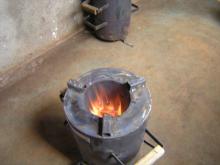 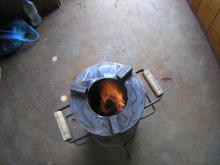 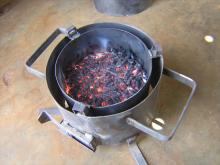