Dear Roger and TLUD Fans (the other kind)

Report on TLUD Discussions at the 2010 ETHOS conference

There was a good showing of TLUD technology at the annual ETHOS Stoves conference in Kirkland, WA, USA on January 29-31, 2010. This report covers some of the discussions about TLUDs that took place at conference sessions.

Dr. Paul Anderson, a.k.a., “Dr. TLUD”, made the pitch for TLUDs and biochar throughout the conference. He brought a large collection of 20 different TLUDs. Most were simple homemade devices made from “tincanium” (Dr. Anderson’s Friday evening presentation on the wonders of “tincanium” was delightfully humorous). TLUD designers Art Donnelly, Christa Roth, and Hugh McLaughlin all had stoves on display. Anderson had one example of a mass produced TLUD that is manufactured in India.

About 30 people attended the TLUD community discussion session. To get an overview and discover who had which type of specific interest, the participants were asked to raise hands on which aspects of application of the TLUD principles they were interested in. The following aspects were identified:

* Applications: is the main focus on cooking, biochar, or a combination of both?
* What are appropriate sizes? TLUDs exist for 2 cups, 2 liters, 5 l, 20 l up to 5 gallon, 20 gallon, 55 gallon. The interest in producing biochar is driving design of larger TLUDs.
* Natural draft or forced air. If using forced air, what are the implications of different power sources: grid, Thermo Electric Generator (TEG), battery based electricity
* Emissions (indoor, outdoor, any)
* Fuels (types of fuels, sizes and densities)
* Locations (which continent, urban, peri-urban, rural environments)
* Materials for TLUDs (ceramics, metal)
* What price range is acceptable? (developed country, developing countries)
* What can we as individuals and organizations do to advance TLUD technology?
* What are the future prospects of TLUD technology?

Participants at the TLUD session participants made a list of TLUD features as compared to other stove types such as the rocket stove:

* Makes biochar
* Starts fast, boils water very quickly, and burns a long time on one load of fuel
* Less attention required for fuel input (no continuous stoking of the fuel needed), increasing freedom for the operator/cook
* Fuel flexible – uses small size waste that cannot be burned in other stoves
* Cleaner than other kinds of stoves, with low Black Carbon (BC), Organic Carbon (OC) and CO
* Variety of scales and applications from cooking to metal forging, including barbecue, grilling, frying, heating, lighting
* Lightweight, portable and modular; can use multiple units to control heat output
* Easy and cheap to build from tin cans or sheet steel. Dimensional tolerances are not stringent
* Low temperature operation. Pyrolysis temperatures are below 500 degrees C, resulting in less combustion chamber burnout
* Suitable for fireplaces that are not allowed to burn open fires any longer
* Safe for indoor space heating with flue exhaust
* Can be an inexpensive add-on to existing stoves for specialized applications (e.g. water kettle in addition to a plancha stove) and to take advantage of small sized fuels not suitable for a rocket stove

* Lack of turndown ratio
* Lack of emissions robustness. More emissions on startup and sometimes on shut down.
* Changing fuel form factor when adding new fuel can cause stalling.

The group discussed in detail the following ideas for advancing TLUD development:

**Materials:** light-weight ceramics are not necessarily needed for insulation of the combustion chamber, unlike in a rocket stove, as for TLUDs the temperature in the fuel bed stays at ambient temperature until the pyrolysis front passes through. Then temperatures get higher. The open flames are not within the combustion chamber but above the fuel bed. The hottest parts of a TLUD stove are the concentrator disk and the bottom of the fire chamber, where the remaining charcoal might be burnt creating high temperatures (if the char is not dumped out and conserved for other use e.g. as biochar). Ceramics are cheap to fabricate, e.g. consumable stove components like the concentrator disk or the bottom plate of the fire chamber. Options for modular stove designs containing ceramic parts to be explored further. A huge gap between standard pottery and industrial ceramics was noted.

**Production and Dissemination:** Stoves should come as a kit: combustion chamber + pot stand/application + snuffer box for the char to be saved.

**Economics of charcoal:** The saving of char could become more popular if the produced charcoal were attributed more value (carbon offsets for biochar used in the soil, charcoal fines to be processed into charcoal briquettes, water filters etc.)

**Modular advantages:** TLUDs excel on high power output, e.g. boiling water, but don’t turn down the power so well. The concept of having a different and/or smaller combustion unit for the simmering stage or replacing the continuous heat addition with a retained heat cooker should be explored further. Modular systems could use a number of TLUD burners under a large pot or grill. If cooking lasts a long time, such as firing a grill at a restaurant, you could replace spent TLUDs with new ones to keep the heat going while you recharge spent TLUD’s with new fuel.

Despite the advantages of the TLUD there are very few stove programs using TLUDs. Here are the ones we know about:

* The BP Oorja stove, now called FirstEnergy, distributed 400,000 units in India, but there exists little feedback on the campaign.
* Phillips had a TLUD stove and planned a major roll-out in India to start late 2009, but no up-to-date info is available.
* Nathaniel Mulcahy of World Stove is manufacturing institutional and household size stoves in Haiti (uses a pyrolytic gasifier technology similar to TLUD); allegedly building over 100 units per day with plans to upscale and add a fuel production unit for grass pellets. This is a very interesting project in the limelight, with high potential to create worldwide awareness. To be observed.

Other than those listed above, there are no projects yet at a major scale. Participants observed that this was a ‘chicken-and-egg’ scenario: Donors only want to roll out ‘already proven technologies’ but nobody apart from major companies like BP or Phillips has the money to do the research needed to prove the technologies. Funding is needed for research to get the combustion chamber to the application stage and to collect user feedback on a major scale.

The group felt there was a strong need to get more experience on the ground building and cooking on TLUDs. In Uganda this year a TLUD-project with World Bank funding will start. Funding has been secured for 2 years. More projects are needed.

What participants committed to do:

* Cook on a TLUD. Several people have been making TLUDs, but very few have been cooking on them. Some people volunteered to use a TLUD for cooking for a given time, like a month, and blog about the experience. More volunteers are needed to do this.
* Create awareness and knowledge about TLUDS.
* Paul Anderson committed to put a TLUD handbook on the web.

Upcoming TLUD events include a Combined Heat and Biochar event in Massachusetts on 9-13 August (contact Paul Anderson for more details) and the annual Stove Camp at Aprovecho, 26 to 30 July. Dean Still, organizer of the Aprovecho Stove Camp has said the camp will focus on the TLUD this year.

Here I show the 4th can used in the P80 design. It is a 1 quart paint can.
I believe the holes are unnecessary and will try a new can tomorrow. This
can acts to collect and focus the thermal energy in a 3" diameter column.
Works very well. 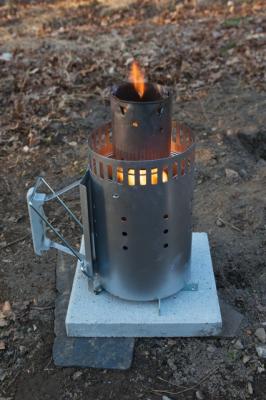 Can #1 is the 3 lbs Costco burn pot with 4 lbs of softwood pellets.

Can #2 is Weber charcoal chimney used, in this case, to make charcoal, not
burn it.

Can #3 is the second Costco can that will go around the the focusing can an
support the "gas drip pan" and gas grate.

So the p80 design has two inner cans and two outer cans. The outer cans stay
relatively cool and help keep the heat in the system.

For the most recent updates see: http://www.flickr.com/photos/jockgill/ 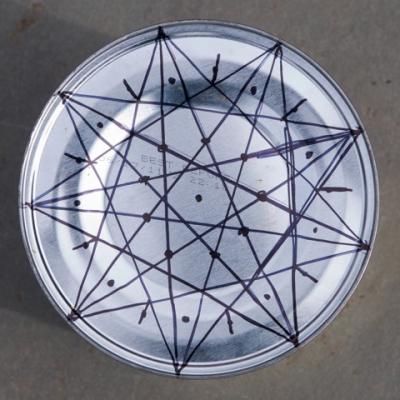 For the first time at one Internet location, the basics of "Top-Lit UpDraft" (TLUD) micro-gasification are available along with numerous links to source documents. This "TLUD Handbook" is a "draft for
discussion" and this is the 2010 copy of the Handbook. 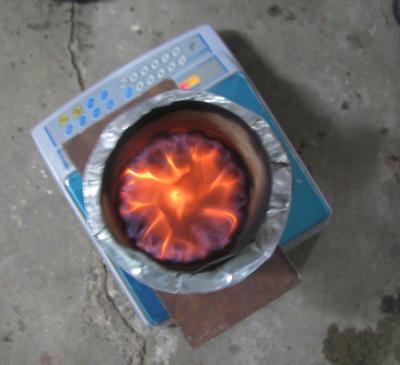 Roger Samson was here tonight and we made and tested a Grasifier: a Switchgrass burning stove based on the dimensions of the Vesto adapted to make a lower cost pellet burning stove for Haiti.

Lighted with two caps of paint thinners
The flame went completely blue (just before the end) then wobbled a lot and went out.
When it went out there was no smoke indicating there were no volatiles left.

Time to fabricate, about 30 minutes.

I see this as a burner that can be attached to the centre of a Haitian charcoal stove to convert it into very clean burning a pellet stove. 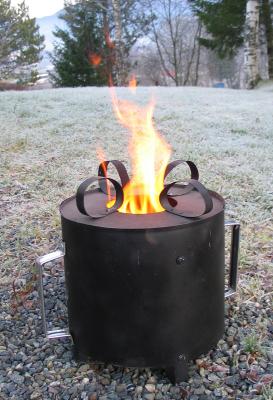 The Peko Pe is an easy to built, top lit, natural draft (no fan) gasifying stove that burns biomass completely (low to no ash or char). It is

The Energy Unit, single also called Peko Pe is designed to cover the general basic need for energy, but can be manufactured both smaller and bigger.

The combustion chamber is the heart of the system, and from there the heat will be consentrated up under the pot. The Energy Unit can be used both for cooking and for heating. Single, as a cooking or heating stove, it will cover the basic needs of energy for smaller household. More units put together will cover the need of energy for bigger houshold, institutional kitchen and pots of any size. 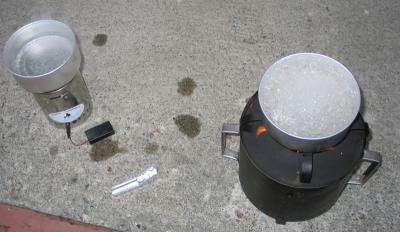 The fuel
Any kind of dry combustible biomass can be used as fuel.

The fire has complete combustion; is High temperature. No smoke. No soot. Some tar under the pan. Sensitive to wind

The usage
It is New technology and requires some training, but it is Easy to use; Flexible; Fits all types of kitchen utensils; and transmits No heat to the sides.

Paal Wendelo has created a pdf of his powerpoint presentation illustrating the comparative wastefulness of traditionally made charcoal compared with his TLUD stove.