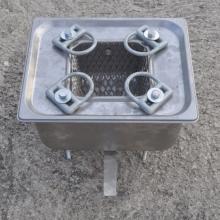 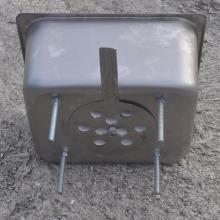 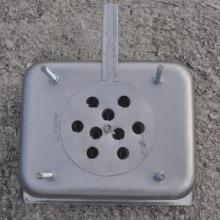 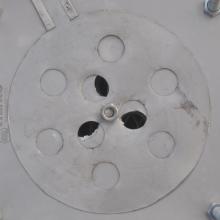 In my continuing quest to use readily available manufactured materials for stove construction, here is the steam pan charcoal stove with "perforated lollipop" air control. It is a 1/6 size steam pan (roughly 6" x 7" x 4" deep) inside a 1/2 size (roughly 10" x 12" x 6" deep) with 1" ceramic fiber board insulation between. The charcoal chamber is lined with expanded stainless steel to extend the life of the inner pan and improve air flow. Army surplus D rings are used for pot supports. Threaded rod for legs. It can be easily disassembled for repair. It has a small charcoal capacity like the BURN's Jikokoa (formerly Tank).
I plan to eventually build a two burner version in a full size steam pan.Nike 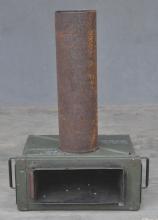 On my trip to Haiti in March 2016, I finished the ammo box stovetop oven. It is made with two ammo boxes, ceramic fiber board insulation, some stainless steel sheet, and various hardware. The oven chamber is 13" x 13" x 5". I plan to add split firebricks on the floor for use as a pizza oven. It fits on a household rocket stove but could be used over virtually any heat source.nike black leather school shoes clearance outlet 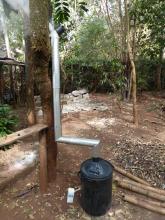 We are trying to (a) reduce the amount of emmisisons from charcoal production and (b) Condense and recover as much of the smoke into a usable product for your home/farm. Wood tar - the following is an explanation from the good folks at Food and Agriculture Organization of the United Nations (FAO) about what is going on in this process.
"The non-water component consists of wood tars, both water soluble and insoluble, acetic acid, methanol, acetone and other complex chemicals in small amounts. If left to stand, the proligneous acid separates into two layers comprising the water insoluble tar and a watery layer containing the remaining chemicals. Recovery of the water insoluble tar, often called wood or Stockholm tar, is simple - it is merely decanted from the water phase. This wood tar has uses as a veterinary antiseptic, a preservative for wood, a caulking agent, and as a substitute for road tar" http://www.fao.org/docrep/x5328e/x5328e0d.htm

On a recent trip to Haiti I was finally able to construct my CharBowl(tm) charcoal stove. It uses two nested stainless steel bowls (5 quart and 8 quart (4.7 liters and 7.6 liters))for durability and reflectivity with castable insulating refractory between them to reduce conductive heat losses. It has a 6.5" (16.5cm) dia cast iron grate for durability. It has a secondary air pipe to reduce CO emissions and increase heat output. The secondary air outlet pipe is 3/8" (10 mm) nominal (ID 0.493" 12.5mm; OD 0.675", 17mm) black iron with a Tee fitting on top to keep charcoal from dropping into it. 3/4" NC 10 (19mm 2.5) machine threads were cut over the pipe threads. This allowed the use of a split nut and flat washer inside and outside the bowls to hold the bowls together. The elbow is 3/8" to 1/2" . The inlet pipe is nominal 1/2" iron (ID 0.622" 16mm; OD 0.84", 21mm). The bowls sit on a stock pot base for stability and primary air control. (I couldn't get my hands on the stainless pot I really wanted to use for the base. I'm planning to build another with such a base now that I'm back in the States.)
I hope to get some testing done on my second prototype.
It can be used as the base of a TChar stove.Nike Air Force 1 '07 Lv8 Utility White/White-Black-Tour Yellow – nike dunk high pro sb kentucky derby 2017

The triplets of triplets in the secondary air supply is a significant improvement.

The 18-12-6 iCan now has much greater total time with a very well behaved flame and an air fuel mixture that is lean to good for most of the run.
There are still several minutes of a too rich mixture that does emit some soot.

Run time on 350 grams was 27:45, most of the smoke was gone within 2 minutes, just two floaters, and the biochar had a good clean nose. This is about as good as I have gotten so far.

I’ve been following a couple of different groups and discussions to learn about biochar for about 6 months. Id like to share what I’ve been learning and ask a couple of questions.

My purpose is to use biochar as a component in biological soil synthesis and buffer for use in a vaquaculture growing system.

I have been making small TLUD stoves, observing modeling tweaking making another. 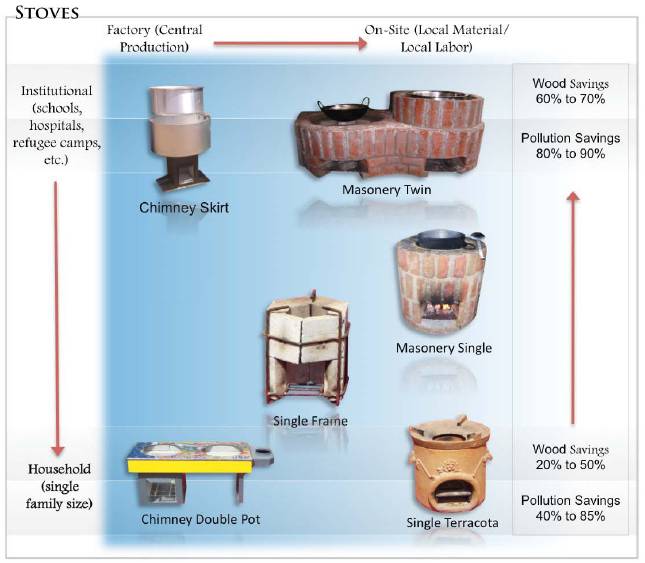