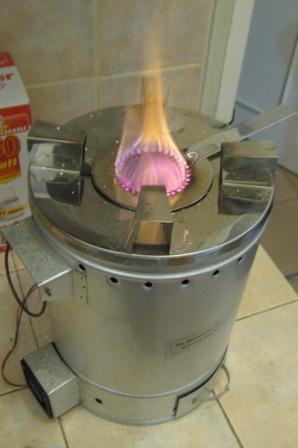 Attached is a picture of my latest coal gasifier stove. This
is the same basic TLUD stove I have for wood charcoal and wood chunks.

For domestic use, I use carbonized coal (or coke) as fuel instead
of the raw coal. Coal can be used for the stove, but we don't want to promote
this as a fuel since it emits poisonous gas. I would prefer to use coal for
industry application where gas can be cleaned before it is released to the
atmosphere.

I provide only a small amount of coal fuel in the gasifier stove, enough
for cooking. This mean that the power output is only small and the
metal I use is a stainless steel.

I ignite the carbonized coal by using a wood charcoal that has been soaked in
kerosene as igniter. [This is a TLUD stove, so ignition is at the top.]

[In the Belonio TLUDs, the fan only blows the primary air. The
secondary air is
pre-heated as it rises naturally between the fuel cylinder and the outer
cylinder, finally exiting into the rising flow of combustible gases.]
The smoke in the coal gasifier I have was eliminated [combusted] by mixing
preheated air with the gas generated from the reactor. I think
there is no need of [forced] mixing the secondary air by creating turbulence
with the combustible gases. Because in that case, you will need a
slightly bigger fan with enough pressure to push the air.
MJ Biomass Gas Stove