Images of experiments with a mesh wick in a charcoal stove.
Jigme Rangdrol Class of 10 year Olds June 2006 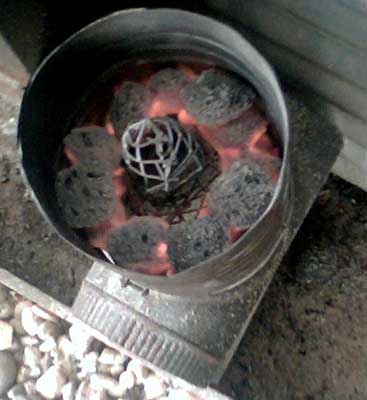 The original idea was to see if we could coax the gas from the fuel to climb up a mesh frame and burn above the fuel bed thus allowing us to see what was going on better and see subtle changes in CO burns.

The completed results of the mesh wicks is as follows.

We did a total of six test burns. Each had a mesh wick made from galvanized wire cloth. Each was a top lit fire with no measurement of fuels. Each was performed in a coffee can with a wire mesh grate for a bottom and the whole unit sat atop a stove pipe "T" to allow unrestricted air flow from under the fuel bed to the burn zone.

The first 2 forms were cylinders, one tall and one short. Neither the blue flame thought to represent CO burns nor the flame "climbing" we hoped for were evident. The mesh did not get red hot.

The next form was a cylinder 1/2 the diameter of the first in an attempt to increase the temperature. Still no blue flame however a much improved burn. The mesh got red hot and it was clearly much more uniform burn.
The flames attempted to climb the mesh for as much as an inch however they never really got higher than the fuel bed.

The next was an outer cage to provide an air supply around the charcoal as well as an inside mesh wick. There was never a blue flame however we got red hot mesh with less fuel. It was clearly a colder burn, less uniform and no real flame climbing was ever produced.

The next was the same outer cage and a cone shaped mesh wick. No blue flame but again red hot mesh and a better burn than the first outer cage.

Finally the cone shaped mesh wick by itself. This got the mesh red hot and burned very uniformly. Alas no blue flame however this shape was an improvement as it produced the same results as the small cylinder with a lot less fuel and has other usefulness.

There were problems.
The wind in the shop was a real factor for some of the burns and the charcoal is old.
Several "helpers" sometimes make the results more questionable.

In conclusion.
We found that the smaller diameter cylindrical mesh wick [ about 1/5th the total diameter] provided enough air for a very hot burn. It got the mesh red hot and the flame clearly sought and climbed the center wick, presumably following the gas and heat.
The larger diameters and outer cages seemed to cool the fuel down too much for a red hot wire to be produced.

Using the blue flame test for CO, there was either not enough air to allow the CO to burn or it was not hot enough. We never got a blue flame going in any of these configurations.
The cone shape has definite appeal. It has an unfortunate but useful burn pattern. It burns very hot at first as there is more fuel. As the burn continues the "ring" of fire gets wider and less dense. This is not so good for trying to get a wick going but very good for cooking! It is a near perfect fuel load for a good boil and then simmer.
The outer cage cooled the burn way down but it would be, as some of the other forms no doubt, very useful at larger scales of fuel load. 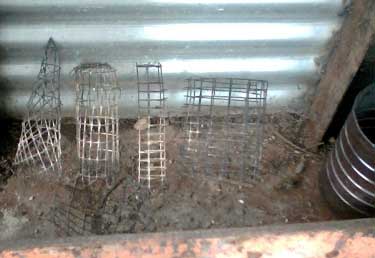 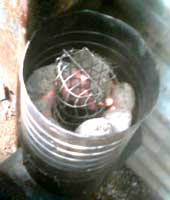 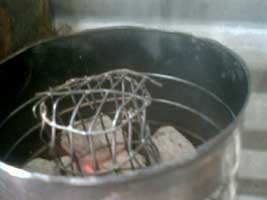 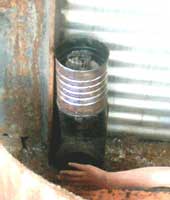 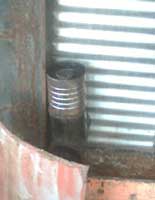