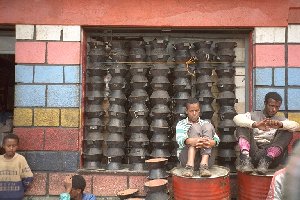 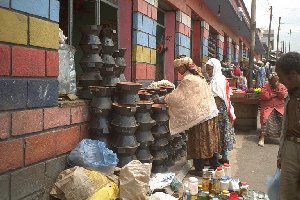 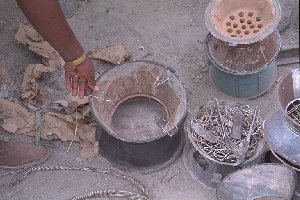 ESD's Team began work on improving charcoal stove production in mid- 1990. Several designs were considered. One design, based upon the Kenya Ceramic Jiko (KCJ), which has been very popular and successful in Kenya, was adapted by the Team to create the Lakech improved charcoal stove. Laboratory and household trials showed the Lakech to save over 25% over the traditional Ethiopia metal charcoal stoves.

The Lakech proved popular in household tests. The Team began full-scale commercialisation of the stove, totally through the private sector, in early-1992. By the end of 1994, over 70,000 stoves had been sold in Addis Ababa. The Lakech had reached "maturity" with dozens of ceramic liner producers and as many assemblers. By early-1997, the Team estimated that over 300,000 Lakech stoves had been sold. The Team discovered in mid-1996 that they had been seriously undercounting sales by as much as 50% over the previous year. Monthly sales of the Lakech now top 4,000, and the Team estimate that as many as 300,000 Lakech stoves could be in use in Ethiopia after five years’ commercialisation.

While the Lakech is enormously popular and successful as an energy savings device, the Team still believes it is very important to track quality control and to work with producers to maintain high standards. Consumers require information on quality issues in order to select the best stoves from the marketplace. Continued monitoring and evaluation are necessary if the stove is to continue to provide true energy savings.

Here are four photos I promised. They show the Lakech improved charcoal stove that we have been working with in Ethiopia (over 300,000 sold so far), 35%+ efficiency improvement, cost around $1 per stove, etc. The first two "lakmerc1 & 2" are taken in the Mercato in Addis Ababa, just to show how many are around and how they are sold. The Lakech now sells more than traditional metal charcoal stoves, and at about 2/3 the price. It is a "modern" stove, and it is one meets many of Ethiopian households' cooking and cultural needs (the latter is very important for the stove). The "lakcompl" is a photo of the stove in its full. Patterned on the Kenyan KCJ, it has several advantages, including tremendous robustness, over the KCJ. Also, we've followed it with quality control, lab tests, training, TA, etc. over the past six years, so we know it's a high quality stove, which, unfortunately we cannot say about the KCJ today. The ceramic liner for the Lakech is fired by traditional ceramicists, who have a tradtion of firing ceramics that stretches over several hundred years. They transport thousands of these liners (which are made with a mould) to Addis. A dozen stove assemblers are on hand to purchase the liners. They then assemble the liners with a thin metal cladding which forms the exterior of the stove. The liner is fitted with a mix, and the stove is painted. The stoves you see are selling in the Mercato, the largest open air market in the world. However, the Lakech sells in some of the most modern supermarkets in Addis. There are some fascinating dynamics to this stove which have a lot of relevance for other stove projects. We could discuss, and would love to. Hope this is of interest. Cheers, Mike (ps, as the transfers have gone so well, I also include a file for assembly of the Lackech, title "lakassy". Again, Ciao!Nike Air Max 270