There are 3 billion people in developing countries that rely on solid fuels for almost all of their cooking. The question can be asked how many of these over 800 million households cook with an improved stove? The answer comes from a new study by the World Health Organization (WHO) and the United Nations Development Programme (UNDP). Like any good mystery story you will have to skip to the end for the answer. All I will say is that the results may surprise you.

The statistics in Doug Barnes' article are drawn primarily from this WHO United Nations report, which has some Great Information about Biomass Energy use and the Health Impacts of that use. 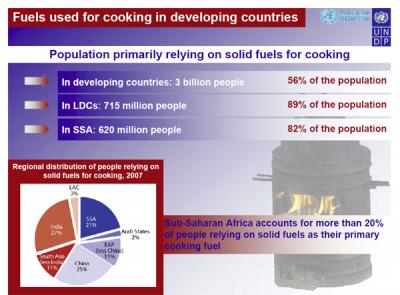 The "Energy Access Situation in Developing Countries - A Review focusing on the Least Developed Countries and Sub-Saharan Africa" report draws attention to the energy access situation beyond the conventional focus on electricity, especially in poorer developing countries where access is the most constrained.

Main topics covered by the report include:

Some Key Points from the report