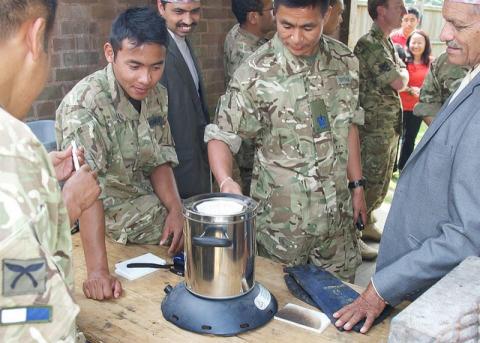 Practical Action and the University of Nottingham organised a demonstration of the SCORE stove at Warwickshire Gurkha barracks, July 18 2013. PHOTO/Practical Action
NUNEATON, England (Thomson Reuters Foundation) - On a sunny July day at the Queen’s Gurkha Signals barracks in Warwickshire, England, a crowd gathered near a picnic table as men in military garb dished out paper plates of rich Nepalese stew. But the real attraction was the innovative stove used to cook the lunch. By cutting the risk of smoke exposure while also producing enough electricity to light a home, it could bring both health and economic benefits.
Many of the Gurkhas serving at this military base were recruited from Nepal, where finding alternatives to open-fire cooking is a challenge. Traditional cook stoves often consist simply of stones atop an open fire, with little ventilation.
Many villagers in rural areas have no choice but to cook indoors, especially when it is cold, so they end up breathing in dangerous amounts of smoke on a daily basis. This leads to health problems like pneumonia and lung cancer, which disproportionately affect women and children.
Household air pollution from cooking with solid fuels like wood poses a huge health threat around the world. It is estimated to kill around 4 million people a year, according to the Lancet’s most recent report on the global burden of disease. That makes it the third leading risk factor for the global disease burden after high blood pressure and tobacco smoking.
In an effort to solve this problem, the University of Nottingham and technology-focused charity Practical Action have designed a new kind of stove, the “SCORE Stove”, which uses wood as fuel but eliminates dangerous smoke fumes and is about twice as efficient as traditional models. They asked the Gurkhas to test it.
“Nepalese villagers spend a huge amount of time collecting wood for basic needs like cooking,” said Simon Trace, chief executive of Practical Action. “It’s an all-day process.”
The SCORE stove consumes about 2 kg of wood a day, under half the usual amount. With less wood to collect, local people could use the extra time for other income-generating activities.
POWER FROM SOUND WAVES
The stove’s most recent design addition also makes it a source of power. The stove takes excess heat produced during cooking and converts it into sound waves, which then generate electricity.
The stove has been able to produce up to 36 watts so far in lab tests, the most of any clean cook stove so far, according to its designers. Three hours of cooking would yield enough power to light a home for a night using efficient LED lights, or to charge a mobile phone.
This may not seem like much, but any amount over 10 watts is useful, and even incremental changes in power availability help, said Paul Riley, project director for the SCORE stove.
Mobile phone ownership has skyrocketed in many developing countries, including Nepal – and that access to communication and information can be invaluable. LED lights could also replace kerosene lamps, the dominant form of lighting in Nepal which also causes significant problems when it comes to health and carbon dioxide emissions.
Hoping to grab some attention for the new cook stove, as they seek funding to bring it to market at an affordable price, Practical Action and the University of Nottingham demonstrated it at the barracks during a visit by several Nepalese officials and academics.
“Knowing so many people are suffering just from preventable disease, this is not acceptable in the 21st century,” said Ram Kantha Makaju Shrestha, vice-chancellor of Kathmandu University. “I am thrilled (about the stove). This is what we need.”
PAYING FOR VALUE-ADDED
The stove has been tested in Bangladesh and Nepal to make sure it is suitable for rural communities. It currently costs as much as £4,000 to build, but the plan is to sell it for £100 when it hits the market, perhaps in a year. Cutting the price to that level would require it to be mass-produced in the country where it is to be deployed.
The hope is that consumers will see value in the stove’s electricity-generation capabilities – enough to pay a higher price than for other clean stoves. “Often, people will be driven by how much money they have in hand,” Riley said. “So they would choose the cheaper stove, even if it lasts only four months. Then it’s not really the more affordable option.”
The SCORE stove lasts at least a year. Its thermo-acoustic technology requires no moving parts, and it is composed of materials that are easy to find and replace. A metal scrubber in a glass tube, for example, creates the sound waves during the cooking process.
Riley said the stove could also generate income from carbon credits. More research is required to boost the amount of power it can generate, but Riley said this could reasonably reach 300 watts. A unit with that capacity would cost five times more to produce than the current version, but that could be offset by carbon revenues, he added.
As it is, the SCORE stove could be especially attractive for those who have little prospect of being connected to national power grids for the foreseeable future, Practical Action head Trace said.
“The more options we have at affordable rates, the more likely it is that people can find one that fits with their own circumstances,” he said.
Erin Berger is a Thomson Reuters Foundation intern, writing on climate change issues.
Air Max Shox 2018