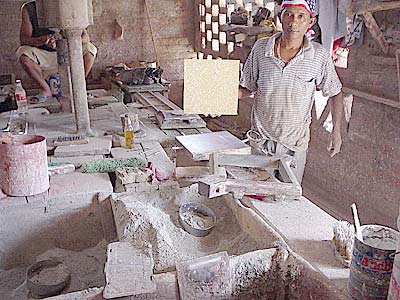 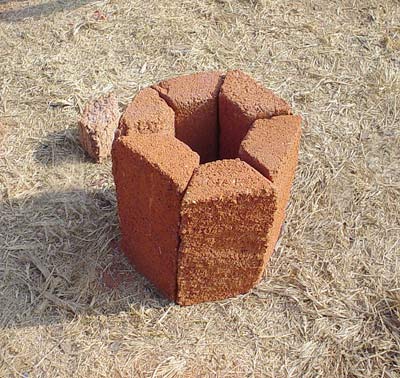 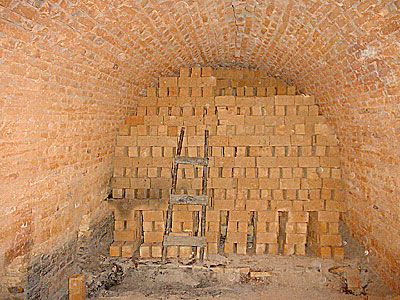 A kiln in El Salvador for firing bricks

In work for the Aprovecho Research Center, other researchers and I have
recently developed several types of insulative ceramics. We wanted to see if
it was possible to produce similar materials elsewhere. The following
report describes methods for making parts for combustion chambers using
materials and processes available in and around the community of El Coco in
El Salvador.

El Coco is a community of 800 people located in a volcanic area near the
Guatemalan border. Pumice deposits in the area are typical of deposits found
in many areas of the world. The nearby town of Chalchuapa is a small
agricultural community with a market, hardware stores, pottery operations
and several brick kilns, which supply the needs of the area.

Several natural deposits of pumice are found around El Coco. These deposits
consist of layers of loose material from ½ to 5 meters thick. The maximum
size of particles in each deposit varied with location and ranged from as
much as 3 cm down to 1 cm in size. At first glance, the density of these
deposits seemed to be about the same. When we screened samples of these
deposits into their component sizes and weighed them we found significant
differences in the densities of different sizes. Larger pieces of pumice
all tended to be lighter (0.25 to 0.35 gr./cc). Smaller sand-sized portions
varied in density from 0.31 gr./cc to 1.13 gr./cc depending on the deposit
from which they came. Finding that smaller particles of pumice are denser
than larger particles in the same deposit is consistent with findings from
pumice deposits in Oregon.

We needed to use only lightweight components in the ceramics in order to end
up with a finished product that had low density. It simplifies the task to
use a portion of pumice from all component sizes. We found two methods to
achieve the desired result. 1.) Combine the lighter sand portion from one
deposit with larger particles from another deposit. 2.) Screen out and
discard the heavy sand-sized material from a coarse deposit and then crush
some of the larger pieces to manufacture some finer, less dense material.
Both approaches proved workable.

Clay was obtained from a potter in nearby Chalchuapa. The potter processed
this clay himself from local sources. This clay was almost identical to the
mix used by the brick maker in the same neighborhood. He mixed 1 part
"barro negro"(dug from the neighbor's yard) and about ½ part "barro rojo"
(trucked in from the countryside nearby) with water. He then screened and
dried the resulting thin mud in a large shallow pond. When the mud had
dried to the desired consistency, it was mixed with a small amount of
"tierra blanca" (which I believe to be fine volcanic ash) and used to make a
variety of earthenware pots.

The brick maker used a similar recipe (proportions are often "eyeballed"
rather than measured exactly) but did not bother to screen the material. He
also added a small amount (5%-10%) of horse manure to the mix for bricks and
"baldosas" or floor tiles.

Terms like "barro negro" (black clay), "barro rojo"(red clay), and "tierra
blanca"(white earth) are used by potters and masons throughout Central
America, but do not necessarily signify identical materials. It's important
to note that potters or brick makers in a particular area will have
developed their own "recipes" which produce good ceramics using local
materials.

The design of brick kilns varied from country to country. All the kilns we
saw were wood fired. We measured temperatures in various kilns using
pyrometric cones. Kilns in Honduras incorporated a chimney in their "arched
tunnel" design and reached a temperature in excess of 1050 C. Kilns in El
Salvador were without chimneys and vented through the top of the carefully
constructed stack of bricks. We measured temperatures as low as 700 C in
some parts of these kilns. Temperatures in the center of these kilns were
950 C. In spite of these variations in temperature, good durable bricks
were produced in all cases.

A "gradation" of pumice was prepared by screening the raw pumice over a
simple two-deck hand screen to separate the material into three different
sizes, and then recombining measured amounts of each size to produce the
proper mix. The upper screen had an opening of 4.75 mm (#4 sieve) and the
screen below it had an opening of 2.36mm (#8 sieve). Both were mounted on a
simple wooden frame. Using pumice with a maximum natural size of about 12.5
mm (1/2") produced screened sizes of 12.5 mm to 4.75 mm for the largest
size, 4.75 mm to 2.36 mm for the intermediate size, and 2.36 mm and smaller
for the finest size. These sizes were then recombined by volume as follows:
two parts of the largest size, one part of the intermediate size, four parts
of the smallest size. A large amount of this pumice aggregate was prepared
for use in all bricks.

Trapezoidal molds having a volume of 2075 cc were used to form bricks, which
were about 29 cm long and 6.8 cm thick. After some experimentation we
settled on a formulation of 2725 cc of pumice aggregate, 480 cc of damp
clay, and 750 cc of water to make each brick. Materials were mixed, tamped
into molds and compacted by hand. Molds were removed immediately and the
"green" bricks were allowed to dry in the sun for at least three days.

Pumice bricks were fired with a batch of regular bricks in the kiln at
Chalchuapa. Firing took 24 hours and reached a temperature of 950 C (cone
08). Fired bricks were dark red in color and appeared to be strong enough
for use in stoves. Density of the fired bricks was 0.81 gr./cc. One of
these bricks was brought back from El Salvador and is currently undergoing
laboratory testing. Other bricks were used in the construction of a "six
brick" rocket stove that is now being field-tested by a family in El Coco.

Six bricks were made from pumice gradation using cement instead of clay as a
binder. Mike Hatfield of Aprovecho developed several combinations of pumice
and cement. All combinations produced usable lightweight bricks, which did
not require firing in a kiln. One sample formulation was: 2750cc of pumice
aggregate, 500 cc of cement, 900 cc of water. Mike also created a nice
"bucket stove" using local materials, which incorporated these bricks in its
design.

Controversy surrounds the use of cement in refractory ceramics.
Knowledgeable ceramists present convincing arguments why cement is
detrimental. Nonetheless, cement has been an ingredient in recipes for
making castable or insulative bricks or kilns. Ken Goyer of Aprovecho
developed an excellent formula for making lightweight, refractory bricks
from sawdust and a mixture of ¼ cement and ¾ clay. A Rocket stove made from
this material has been in regular use for more than a year at temperatures
of around 900 C, and shows no apparent signs of deterioration.

I have made several ceramic materials that incorporated cement along with
clay in the fabrication and have not noted any short-term adverse effects.
I prefer clay without cement but only because cement produces a slightly
heavier material than fired clay.

The big advantage of using cement instead of clay is that it sets up rapidly
and obtains full strength in about three days. No firing in a kiln is
necessary, so it would be easier, and less expensive, to manufacture simple
"market" stoves using this method. Cement/pumice bricks may well have a
limited durability, however. Hopefully, tests to be done at the University
of Dayton will establish how long a cement based brick lasts when exposed to
the higher temperatures in a Rocket type combustion chamber.

A single experiment was conducted to see if it was possible to "self fire"
green pumice/clay bricks in place in a rocket-stove combustion chamber. A
pumice/clay brick was inserted in place of one of the cement/pumice bricks
in the "bucket stove" described above. A fire was started in the stove and
run at "normal" temperatures for one hour. Using a digital thermometer,
temperatures of 800 C to 850 C were observed in the Rocket combustion
chamber. For the next two hours we attempted to produce the highest
temperatures possible in the stove to "fire" the bricks. The bottom
portion of the combustion chamber got hot enough to glow orange and appear
translucent from the inside. The highest temperature measured during this
period was 927 C.

After three hours, the temperature on the inside wall of the clay/pumice
brick was measured at 786 C. A thin layer of loose pumice, between the
bricks and the bucket that contained them, prevented outside air from
cooling the outside of the brick. The thin galvanized bucket that contained
the stove got too hot to hold onto comfortably, but not hot enough to cause
a serious burn. The galvanized coating on the bucket was unaffected. The
fire was extinguished and water was poured onto the hot bricks to cool them.

The cement/pumice bricks seemed undamaged by the test. The pumice/clay
brick was fired to a red color only in the inside 2-cm of the brick. The
outside of the same brick was unchanged. The brick as a whole, seemed
sturdy enough to be used in a stove.

Two lessons were learned from this test firing:
1. It is difficult to completely fire a clay/pumice brick in place.
2. Clay/pumice bricks seem to be good insulators.

It is possible to make serviceable insulative refractory ceramics in
countries like El Salvador having natural sources of pumice. Care should be
taken to locate and use the lightest possible pumice available to
manufacture the pumice aggregate to be used in the process. Screening out
and discarding (scalping) heavy sand components from the pumice deposit will
probably be necessary. Pumice pieces larger than 12.5 mm in diameter can be
reduced by crushing the "scalped" material between two heavy steel cylinders
set approximately 8 mm apart. The resulting product can then be screened and
recombined to produce the pumice aggregate portion of the mix.

Local clay formulations and firing processes could be utilized to make the
bricks. Regardless of the clay formulations or firing temperatures
involved, locally successful ceramic technology should work well to bind the
pumice aggregate together. Pumice/clay stove parts greater than 5 cm in
thickness will probably not require any further insulation and can be
incorporated directly into high mass mud or masonry stove bodies. Using this
or a similar process may make it possible to produce low cost portable
stoves, which not only save fuel but also burn cleaner.

I would like to express my thanks to Stuart Conway of Trees, Water People
and to Patrick Flynn who runs the stove project in El Coco for their help
with this research.