I finally got to lite it up. Again as some of you know my interests are
varied and doubled up. I want to burn what people may be throwing away or
burning to add to green house gases and global warming. I am also interested
in Char and Terra Preta as well as atoll soils are regarded a notoriously
weak. For those not in the tropics my fuel here are chopped up pieces of
the mid ribs from coconut palms. These do take some time to gather dry and
chop but some place these are nearly ubiquitous as rice hulls or sugar cane
scraps and their price may be right for many $0.00. 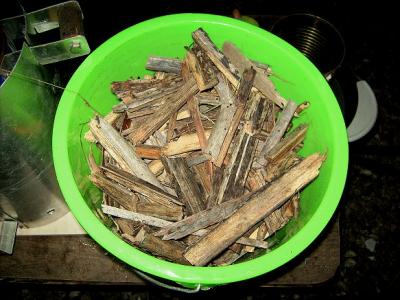 Trying to Lite Off
now its going

Over all the stove owes serious thanks to Paul Anderson, who kept after me
to make it, and Paal Wendelbo and Sai Bhasker. They all contributed ideas
for me to digest. To some I have joked this hydrid should be called the
Champion Pekope Smokeburner. I like the simplicity of Paals and Pauls
secondary air gap. I like Sai's idea of fins to promote swirling and
mixing. I worry a little about Pauls protruding handles so I changed that a
little. Paul uses a riser to promote draft so I kept that and put Sai's
twister fins inside it. .

Lighting it off was not so easy and took three attempts, and much more smoke
that I would have liked. The stem pieces were not catching fire well. I
finally got it going with some copra chips and small pieces of frond riblets
as well, with a dash of WD 40. Once it finally caught in about the 6th photo
the flames do appear to be curling around in the riser can, and in the 7th
the standing flame has a nice twisty shape. The burn was not as long as I
had hoped for as by say 35 minutes it was definitely dying down. The fuel
was quite chunky and not very tightly packed, probalby why. There also was
char material left in the bottom but I should have pulled the burner can a
few minutes earlier.

The reuseable mesh disk in the bottom of the burner, a tin can, and the
simple handles needing 4 small nuts bolts and washers is not very
technically advanced, meaning making multiple standby drop in burners is
"from the dump" cheap. The way I have suspended the burner by its handles in
notches in the outer cylinder is a step towards further simplicity and means
changing in and out additional fuel canisters is very simple. (Please though
not one make jokes about the sloppy mis-sized handles) A craftsman would
have each canister identical. The principle should be clear to all though.
Paal was much the source for the straight simple outer cylinder but the
hanging basket burner means no spacers or legs and only simple holes for air
entrance. I do see some areas for further testing here...the gap between the
inner and outer housing and the number and size of air holes allong the
bottom of the outer cylinder. I have never seen Rajan's stoves but a SS
outer cylinder for appearance, a cooler shell and longevity with a drop in
sacrificial burner might be worth considering.

Since Paul brought up longivity in TLUDS this morning, I do hope that my
aluminum outer cylinder will not get hot enough to have a problem. The
tincan liner simply means drink some more milk and make another one, not big
deal at all. It may not be a Stradavarus, really more of a washtub bass,
but now I can play with the tuning it and my fuels. The main thing is it did
work sort of and I believe a couple of my ideas have merit. Anyone out
there in the larger world who sees a use for any of this please help
yourselves. Also please pass along any suggestions. It is interesting the
the Legislature and hearing got in to fuels, solar and sustainable issues
today.

If Tom does not think this is to simplistic he might want to clean it up and
post it.

From the sand box in the Pacific,

Paal comments about too much primarily air are noted. I am not going to toss away the monel mesh disk, it is sort of a once in lifetime find.

However, I will look at dropping a cut out can bottom on it with varying numbers and sizes of holes. Crispin also suggested trying a wider riser can. I have another 800 gm milk can that is the perfect candidate. Removing the riser is simply, 4 nuts, bolts and washers so wider, shorter and none are all easily tested. If it turns out that no riser is needed I would be delighted as fitting the burner to a pot holding structure is simpler.

I also did another test run last night with different coconut frond stuff mostly tied bundles of leafets a la Paal's reed and straw bundles. This run quite spectacular with a flame shooting high in the air, but the burn time was short. The fiercely glowing orange of the bottom half bottom of the can would sort of indicate lots of air and burning charcoal in the bottom, i.e a real draft and forge like conditions.

I note "make the fuel smaller" however there is a critical issue here. If it is perceived as too much work to haul dry and process alternative fuels the acceptance is not going to happen even if it is free. If it was good enough for Mother----Chaussures Homme J.M. Weston