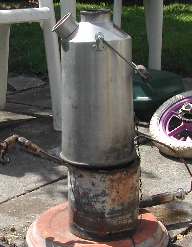 Here I post pictures which may help to explain the evolution of what I was trying to do with my steam aspirator. I have had it successfully running but whilst it sustains combustion in a device that self extinguishes in the absence of a fan, it needs much more fettling. In fact the steam content very much modifies the flame, such that I do not think my monotube boiler and nozzle are at all matched to the task.

I now think it would probably better suit when used to provide only primary air or as an eductor. In essence I must be achieving very poor mass and power ratios on the aspirator, such that Ken Boak's mechanical propeller could well have better conversion of the steam to air motion.

I have also now bought some other tubes with which to demonstrate.