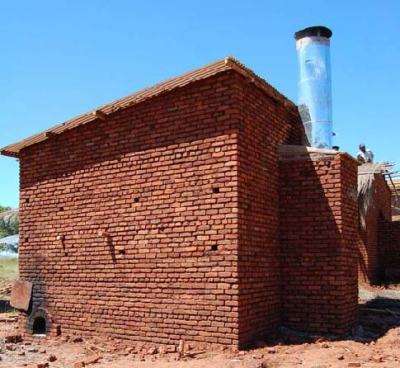 Data Collection at Nature’s Gift and in Kasungu was greatly assisted by the University of Twente Intern Nico Nijenhuis
The Rocket Barn project started in the season of 2005-2006. as a collaboration between Peter Scott, GTZ/ ProBEC, Department of Energy, DGIS and Limbe Leaf Tobacco Company. It has since grown to include a range of different
stakeholders such as Imperial Tobacco, Alliance One, Opportunity International Bank of Malawi (OIBM), NBS Bank, Total Land Care (TLC), the Agricultural Research and Extension Trust (ARET), ATTT, TLTC , Philip Morris International (PMI), Japanese Tobacco International (JTI)
Highlights of this year’s Rocket Barn Research
1. Testing at Nature’s Gift Test facility 16 barns (10 different model types) were constructed. Data was collected from 65 separate cures.
2. Field tests conducted provided reliable sets of data for 41 farmers Fuel consumption data collected from 253 cures in total (148 from a Rocket Barn B, 105 from a Traditional Barn) shows that the Rocket Barn used an average of
12.8 m3 / ton of cured tobacco as compared to the traditional barn which used 25.1 m3 /ton of cured tobacco
3. Auction Floor sales data collected from 41 farmers who used both a traditional barn and a Rocket Barn shows that the Rocket Barn produced, on average, tobacco leaf with a price /kg value of $2.98 as opposed to the traditional barn
which produced tobacco leaf with a price /kg value of $2.39. With an average annual yield per farmer of 2,053 kg (from these 41 farmers) we can expect the following outcome: (See attached report).
Total Annual financial benefit with Rocket Barn technology: USD 1350.93.
This analysis does not account for financial benefits due to increase in leaf yields, which have been estimated at 11%. Due to variation in packing rates and barn sizes it has not been possible to make definitive statements about yield increases due to the adoption of the Rocket Barn. A 10% increase in yield @ USD 2.98 would offer the farmers an additional USD 610 increase in total income. This means that the farmers one time investment of US$700 for the construction of the RB 3.0 can be easily repaid within the first year of operation
4. Field tests have also shown that the 250 stick and 500 stick Rocket Barn RB 2.1 (see table 1 for details) were a significant improvement over the Traditional barn and the RB 2.0.
5. Launching of Rocket Barn scale up in Malawi. Due to high demand from farmers for additional Rocket Barns, a project has been implemented to construct and sell 500 Rocket Barns in Malawi.
6. Manuals and working drawings have been completed for an improved Rocket Barn design:
7. New Designs and manuals for 2008
i. Retrofit Rocket Barn (RBR 3.0) 250 Stick
ii. New Rocket Barn (RBN 3.0) 250 Stick
iii. RB3.0 TZ 250 Stick for Tanzania
iv. RB 3.0 500 Stick
nike headquarters Sneakers