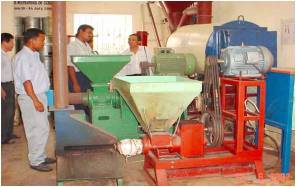 Renewable Energy Technologies (RETs) in Asia [a regional research and dissemination programme sponsored by the Swedish International Development Cooperation Agency (Sida) and coordinated by the Asian Institute of Technology] was initiated in 1997 to promote mature/nearly mature renewable energy technologies in six Asian countries. Activities of Phase I (1997-1998) and Phase II (1999-2001) mostly concentrated on adaptive research and demonstration of the appropriate technologies suitable to the local condition. Phase III (2002-2004) wa aimed at consolidating the gains and achievements.

The package on Improved screw press briquetting and briquette or wood chip fired institutional gasifier stoves were developed under the programme can be downloaded from:
>http://www.retsasia.ait.ac.th/briquetting_technology_packages.htm

The stove is basically a cross-flow natural draft gasifier plus gas burner system. It can be operated 24 hours a day if needed and can be used for cooking, drying or space heating applications. The designs were disseminated through a regional workshop an can be used by any one.

I will be happy to know of your experments and available for sharing my experience.