Tests of the Cajun Rocket Pot 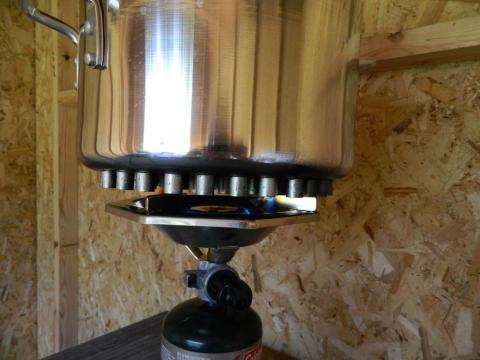 Dale Andreatta, Ph.D., P.E.
November 18, 2013
dandreatta@sealimited.com
Introduction
A series of tests was done to compare the Cajun Rocket Pot (the finned pot) with an ordinary pot of effectively the same size. The finned pot has 70 round fins (pin fins) on the bottom with a diameter of 13 mm and a length of 14 mm. The diameter of the bottom of both the regular and finned pots is 248 mm.

Both pots were tested on 7 different heating devices, with the fire conditions set up to be as close as possible between pot tests. Only one test was done on each pot. There are a variety of ways to compare the effectiveness of the two pots, and as many ways were used as were meaningful for that stove.

The 7 heating methods were:

The heating methods will be described in more detail in the sections on test results for the individual
stoves.
In general, possible methods for comparing the pots are:

There are advantages and disadvantages to each of these methods, and there is no one right way to compare the pots. Some methods are not appropriate to use for some stoves, but in general, results will be given for as many ways as possible to compare the two pots. The reader can decide which is the most valid way of comparing the pots.

The tests done were mostly modified water boiling tests. The modifications were that there was no separate hot and cold start, and that the goal of the simmering phase was to keep a light simmer, rather than the usual goal of keeping the water 3°C below boiling. The simmering period was 45 minutes. For some stoves, this test method was not appropriate or possible, and the specifics of that test will be given.