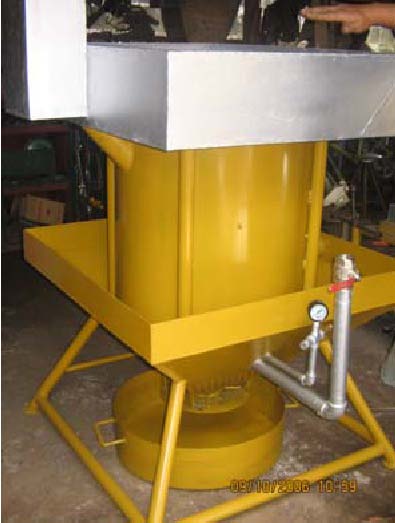 The rice husk quasi gasfier with center-in steam injector is another rice husk gasification project of the Appropriate Technology Center of the College of Agriculture of Central Philippine University in Iloilo City, Philippines to help the agriculture and food industry in converting wastes into useful energy. This stove is an offshoot of the R&D on domestic-size rice husk quasi gasifier stove that uses steam injector to improve the burning of gases during cooking. This R&D project on the design and development was assisted by the undergraduate agricultural engineering students Lucio Larano, Daniel Belonio, and Raymond Paul Aungon of the Department of Agricultural Engineering and Environmental Management of the CPU College of Agriculture. 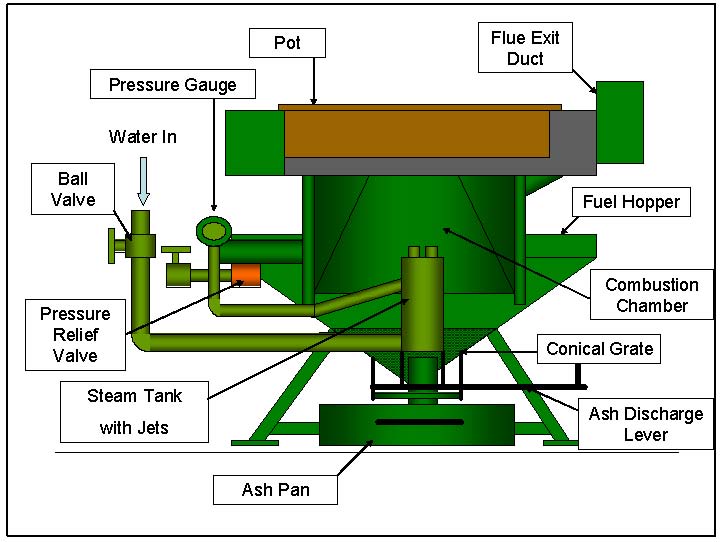 Note: Click images to enlarge
As shown schematically, the rice husk quasi gasfier with center-in steam injector has the following major components: (1) Combustion chamber where burning of fuel and of combustible gases is accomplished, (b) Conical grate where rice husk fuel is burned with the supply of primary air, (c) Fuel hopper where the rice husk is fed before it is burned at the conical grate, (d) Steam tank where water is heated to form a steam, and which is released to the top of the to improve the combustion of gases, (e) Ash discharge lever which pushes ashes for discharged from the grate , (f) Ash pan where burnt rice husks are collected, (g) Valves which control or regulate the flow of water and excess steam, (h) Pressure gauge which indicates the pressure of the steam, and (i) pot holder which holds the pot in place serving as skirt to keep the heat from dissipating. 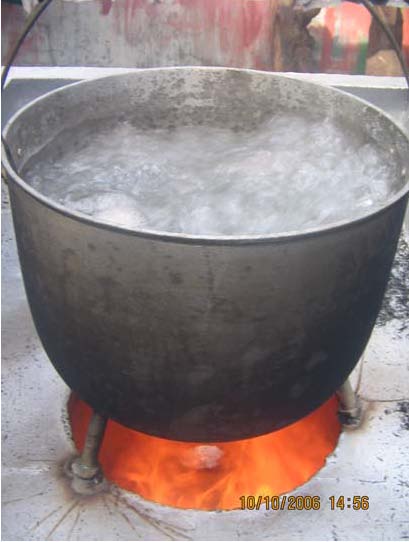 The stove has a hopper dimension of 90 cm x 90 cm and a combustion chamber volume of 0.5 m3. The grate is an inverted pyramid having a grate area of 0.268 m2. The cylindrical duct, seated directly on top of the grate, has a diameter of 60 cm and a height of 45 cm with inverted cone that causes the heat to concentrate to the pot. The steam is injected at the center of the stove, at a rate of 6 liters per hour in an upward direction, to cause the heat energy to be released directly to the pot thereby creating an intensive boiling of water during operation. Fuel is ignited and spontaneous combustion is achieved within a minute using 2 pieces of old newspaper or by sprinkling kerosene on the fuel bed. Rice husk fuel is efficiently burnt inside the combustion chamber at a rate of 32.4 kg per hour. Test results have shown that the average stove burning rate is 121 kg/hr-m2 of the grate surface. Water boiling tests showed that 15 liters of water is boiled within 12 to 15 minutes. The ash produced is 24.4% of the rice husk. And, the thermal efficiency of the stove is 21% with computed power output of 25kW. 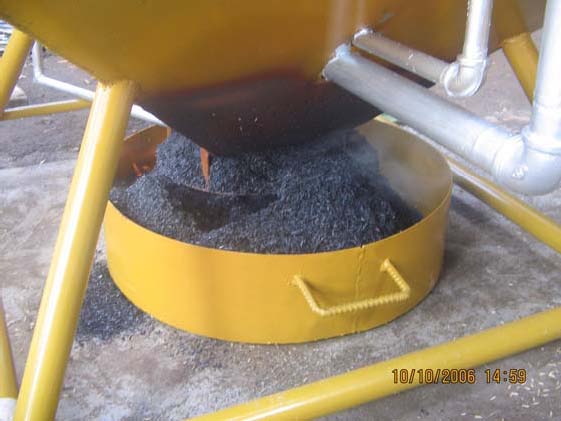 The total investment for the stove is P35,000.00 (1 USD = PHP 52.00). This investment can be recovered within a year compared with the Idustrial size LPG stove. It is simple and is easy to operate. It can be considered as a clean combustion technology for small-scafood processing indutilizing rice husks as fuel and a good source of carbonized rice husk as material for composting. It can be fabricated using local materials and skills.

Any interested organization who wishes to adopt the technology may collaborate with the Appropriate Technology Center, Department of Agricultural Engineering and Environmental Management, College of Agriculture, Central Philippine University, Iloilo City, Philippines. You may contact through our email: cpu_aprotech@yahoo.com , or through our landline at 063-033-3291971 loc 1071 or our mobile phone at 063-09167115222.NIKE AIR MAX