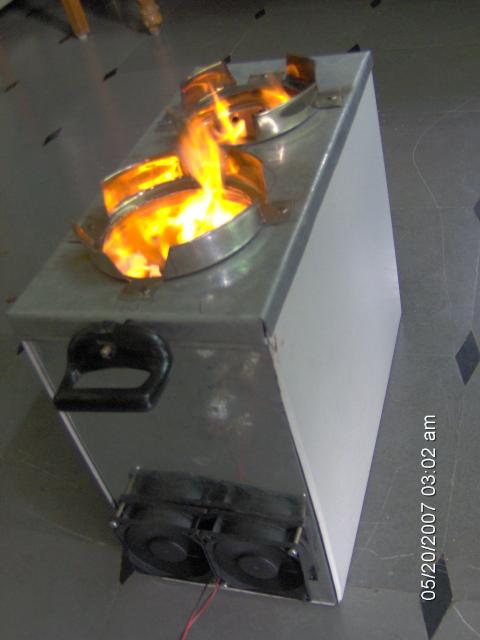 The important features are:

1. There are two chambers for burning simultaneously or one after another or can be used as reserve while one is lit.

2. An old CPU (computer cabinet) is used to create the stove; the power adapter of the same CPU is used for running two computer fans. (0ld CPU's which are otherwise dumped can be put to better use).

3. This is also to demonstrate for creation of bigger stoves with multi-pot arrangement to meet the cooking needs of community / institutional / hotels / hostels / etc.

"This is based on the Top lit up draft (T-LUD) principle with forced primary and secondary air facility. The secondary air burns the smoke / gases generated during pyrolysis by primary air. Two fans are installed on the stove for forced air generation. The efficiency of the stove is 5 to 10 times more as compared to the traditional biomass stoves i.e., with just 10% to 20% of biomass used in traditional stoves. All types of biomass of homogeneous size (natural / chipped) can be used.

I am grateful to the pioneers in this like Dr. Thomas Reed, Dr. Paul Anderson, Garlington, etc. who are responsible for refining the knowledge and technologies on T-LUD Principle." http://www.bioenergylists.org/

Note: All the stoves designed by me are declared as "Open Source Technology".