Dear Roger and TLUD Fans (the other kind) 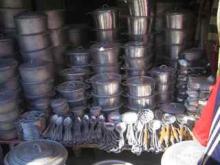 From Crispin: "You know the top of the Stovetec 2-door unit? It has a very thin cast iron plate which is quite cheap but you have to get them from China, about $1. Perhaps they could be made in AL from local drink cans. I don’t think anyone could melt one in normal use."

From Christa Roth:
we had the same idea in Madagascar, where pot-makers in the highlands not only make pots but all sorts of other items at low prices from aluminium. great stuff. all made with sand casting. the Swiss NGO ADES ran with the idea and started making potsupports in 2009, but I only saw the first stove in Switzerland last year (see photos). I don't know the cost but it is affordable.

please copy, it is doable! at least where you have a trade and the skills in country, which seem to be more abundant in the french-speaking countries in Africa

and I like Crispins idea to cast different pots. Let us know how things go. It might be easier to getting the pots adopted than some stoves...
regards Christa
Air Jordan Release Dates 2020