This page has a drawing and some pictures of the latest version of my
combustion experiments.

The addition of a bullet shaped bluff body in the upper mixing portion
of the tangentially swirled venturi has resulted in a more evenly distributed
and shorter flame with consistently lower CO emissions.

The top portion looks from the out side the
mostly the same as it did with my previous experiment,
only now there is the rod which controlls the vertical positioning
of the bluff body. 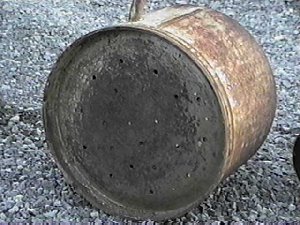 This shows the bottom of the old milking machine pail with the primary air holes. 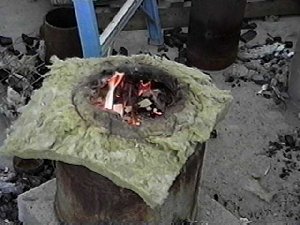 Filled with dry cedar it is lit on top.

The insulation acts as a seal between the pail and the bottom cone of
the venturi burner .Shown below. 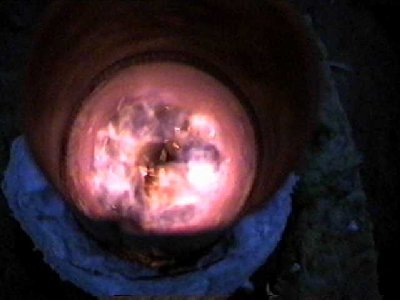 This shows a fairly well mixed and evenly distributed flame filling the lower portion of the combustion chamber during the latter half of a 1.5 hour batch burn.
There is about 90cm of chimney above the bluff body. With the flame extending into the bottom 10 to 20cm. The flame extends further and is a more yellow/orange colour during the early portion of the burn.