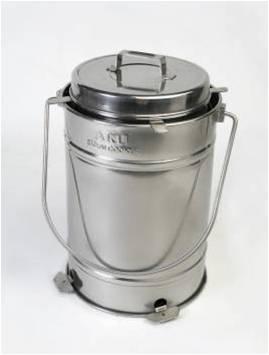 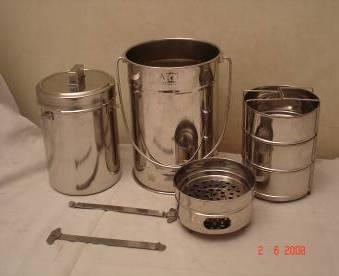 Sarai is a stainless steam steam cooker. It is a non-pressurised cooker, into which you put about 150 ml of water and then lower into it a wire cage, which holds three cookpots, one on top of another. The steam pot has a lid which is kept closed while the food is being cooked. The heat is provided by a charcoal burner, which is designed to hold just 100 g of charcoal or a single honeycomb briquette of 100 g. After the coal has caught fire, the steam pot containing the food to be cooked is placed on the stove.

A hollow cylinder, also made of stainless steel, surrounds the entire assembly, including the stove. The gap between the steam pot and the stainless steel cylinder surrounding it is just 5 mm. The flue gases generated by the stove escape through this gap. In this way, the pot is heated on all sides, instead of just from the bottom. The boiling and evaporation test showed the efficiency of this gadget to be 70%. Beans, rice and vegetables of a family of 4 to 5 are cooked with just 100 g of charcoal briquettes. It takes between 45 minutes to an hour to cook the meal. At present we are advocating it for food that needs to be cooked. We have not tried roasting anything in this cooker.