If you live in a place where wood is your main form of energy you think a lot about wood. Much of your time is spent gathering, handling, and using wood, or money is spent to buy it.

A pante is divided into either 10 or 12 cargas. A carga is determined by how much your bestia (horse, mule, or donkey) can haul. If you have an old, small, or worn out bestia you have to make more trips to get a pante.

Carga, think cargo of an animal. A carga is divided into two large, or three small tercios depending on who you are talking too. A large bestia can carry three tercios. One on each side and another on the top. A smaller bestia hauls two tercios. If you don't have a bestia then you carry one tercio on your back if you are a man, or on your head if you are a woman. The statistics on neck and back injuries would be interesting but as they say in the commercials, "Don't try this at home." Later, I was talking with the health promoter and he says that there aren't any statistics because neck and back injuries are a way of life here. Everybody has them.

Esperanza believes that a carga should weigh 2 quintales (200 lbs.) so a tercio weighs 100 lbs. At 20 tercios per pante this would make a pante weigh 2000 lbs. If you overload a Toyota pickup truck in El Salvador, (The standard mechanical bestia) you can haul a pante. So 2000 lbs. for a pante sounds about right. I recall that you cannot haul a full cord of wood in the United States on an average pickup truck so there is a disparity of information here. A strong person can carry 100 lbs. So a tercio at 100 lbs. seems about right.

Esperanza believes that a carga should weigh 2 quintales (200 lbs.) so a tercio weighs 100 lbs. at 20 tercios per pante this would make a pante weigh 2000 lbs. if you overload a toyota pickup truck in el salvador, (the standard mechanical bestia) you can haul a pante. so 2000 lbs. for a pante sounds about right. i recall that you cannot haul a full cord of wood in the united states on an average pickup truck so there is a disparity of information here. a strong person can carry 100 lbs. so a tercio at 100 lbs. seems about right.

People agree that a pante costs about C250 (Colones). And a tercio costs about C20. That puts a premium on a small amount of wood. Esperanza says that when Miguel gets desperate for money, he will sell her a tercio for $1 (a dollar).

The streets of San Salvador have become the dollar store of the country since the dollar became the legal tender of El Salvador. Everything costs a "dollar". The other unit of exchange has become the "cuoda". We call it a quarter. Much confusion has been created by this monetary change to the dollar and many traditional commodities such as firewood are still valued in colones even though colones are almost nonexistent.

It takes two days to cut a pante of wood and two more days to make 10 or 12 trips with a bestia to deliver it to your home or a place where it can be sold, usually near a road. So a hard working, enterprising, healthy, strong individual can make $7 a day cutting and hauling firewood.

Fidel reminisces about his youth -the years between 1970 and 1978. The only way that he could make money was to cut and deliver firewood to Chalatenango. He was paid one colon per carga, which he carried on his back, since he had no bestia. With 5 colones he could buy a shirt and with 8 to 10 colones he could buy a pair of shoes.

Esperanza says that she uses as much as 5 pantes per year. Three her nephew cuts, and two she buys. This seems like a lot to me and I thought another year she told me she used 3 pantes, which she bought by selling a pig she raised, if it didn't die from "el accidente". I sometimes see her walking down the road carrying a large branch that she has collected herself, even though she is eighty years old. For now let's assume that she uses 5 pantes per year. 5 pantes times 10 cargas/pante times 2 tercios/carga = 100 tercios per year. Or one tercio every three or four days. So if all of this is true, she uses 25 or 30 pounds of leña (firewood) per day. Elena says that she uses a tercio in three days. Since this is the dry season and there is little work in the milpa (corn field), many people are putting up their year's supply of firewood. Three to five pantes is not an uncommon number for a household.

I had 2000 bricks made for "Estufa Larry" (the six brick stove). The brick maker used 2 pantes to fire the bricks for three days in the kiln. Only 1700 bricks survived the kiln and as many as 500 more may be defective. So using 4000 lbs. of leña to make 1200 bricks which will make 200 stoves equals 20 lbs. of leña per stove. This seems like a good deal considering that this much wood could be rapidly recovered by the efficient stove. Say in about one week.

All firewood is not equal. A serious turning point in my stove construction came when I realized that the fire did not thrive in the stove. It turned out that I had selected some leña that was "bad". I set about to learn more about firewood. Short of having a botanical interest one shouldn't try and learn too much about leña. There must be about thirty kinds of trees. Only the old timers know most of them. The younger people will misname them. Sometimes there are two or more names for the same tree. There is some firewood that is considered "good" and other that is considered "bad". "Good" or "bad" may be applied to wood for what we would consider strange reasons- it has a pretty core, or it's ugly. Some wood is punky and considered bad, but it burns really good. Some wood is impossible to split. Much wood has a very high ash content. Some wood is easy to split and burns with a clean, hot flame. This is the wood that you want to use when you are demonstrating a stove for the first time, but your audience will know that you are using good wood. There is nothing more frustrating than showing off your pride and joy and then not being able to light a fire in it. Still some wood is so bad it isn't even considered for cooking. It's sold to the brick makers for use in their kilns. A good stove should be able to successfully burn bad wood, not to mention wet wood or other fuels such as corn cobs.

Now for the bad news. Since wood is a commodity, it is bought and sold in the marketplace. If you save wood in an energy efficient stove you can sell it to somebody else for money. And when you are desperately poor that's exactly what you do, you sell your assets. I heard of a man selling his Model T Ford during the depression for five dollars so he could buy food. Just like Miguel will cut and deliver a tercio of wood for a penny a pound. Times are hard right now and wood which is the available commodity is being cut and sold a fast as possible.

The good side is that at least the person gets a little bit of money instead of just burning up the wood. More wood will be cut anyway because there is still a demand for it. When energy efficient stoves are plentiful enough to reverse the demand for wood, (or more likely when the supply of wood runs out), campesinos will grumble about it, the same way they grumble now about the low price of corn. Energy efficient stoves are a good idea, there just aren't enough of them (yet) to reverse the devastation that is taking place. 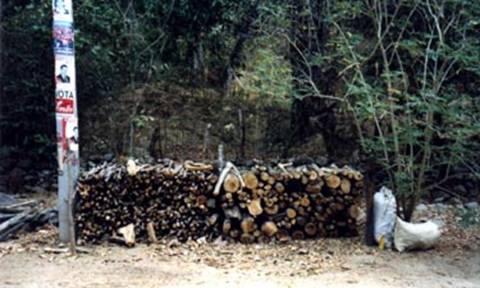 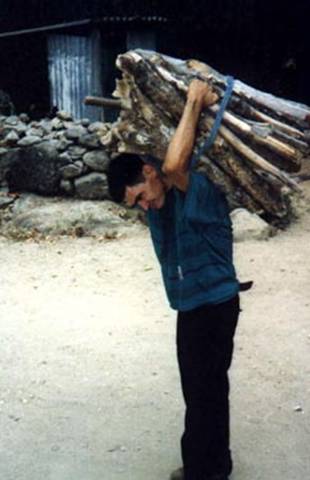 This is a standard scene in El Salvador.
He is carrying more than a tercio of leñ 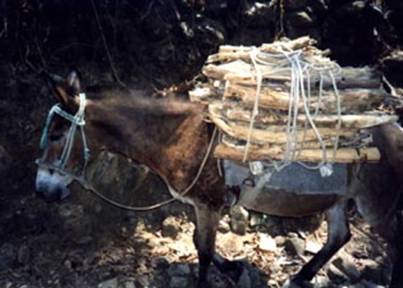 A mule (or a macho) with a carga of leña. 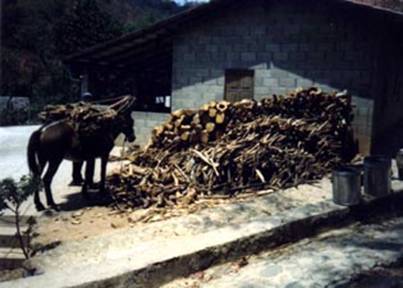 The destination. This family will burn 4 pantes per year. More wood is on the other side of the house. 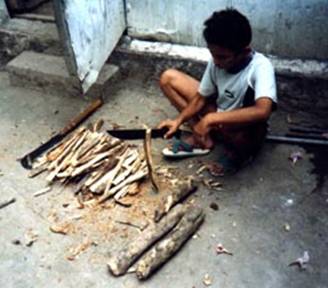 Cargar or rastar?  Nobody wants to rastar leñ (but the men who have to cortar and cargar wish the women would rastar). I paid Ricardo $1 to split this wood. He thought it was a good deal. 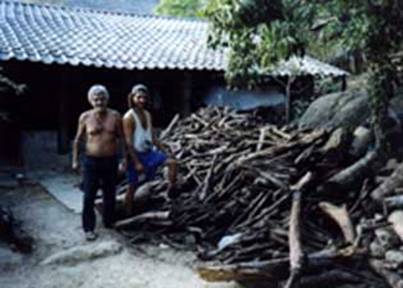 They have more wood on the other side of their house too. 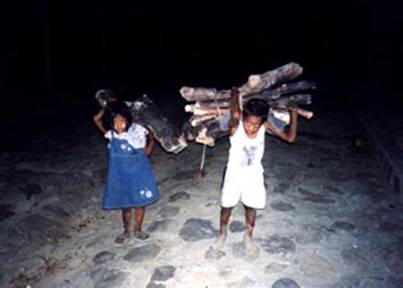 Please write your own caption for this picture.