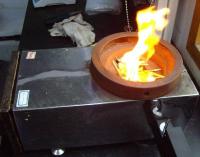 Robert Flanagan, a biochar pioneer with connections on four continents around the world, is among the few who rank as biochar's early advocates, innovators, researchers, and business developers. He remains on the creative cutting edge of biochar development and deployment.

Originally from Ireland, as a youth, Robert emigrated to Australia to work as industrial combustion-electric technician. Years later, researching investment options, he saw the BBC documentary The Secret of Eldorado. Research on terra preta led him to the U.S. in May 2004 to a University of Georgia bioenergy conference. He began assisting EPRIDA at UGA Bio-conversion Center, where his creative enthusiasm inspired several experiments and innovations. Robert helped wire, maintain and monitor the EPRIDA 150-kilogram test burner, and devised simple soil tests to evaluate biochar effects on soil and biomass. Interest from overseas quickly generated a trip to China and a request for Robert to direct his energies to Asia. Disillusioned with slow progress and US government continuing to discourage serious renewable energy research and development, Rob moved to Hangzhou, China, where he is now Chair & President of Hangzhou Sustainable Agricultural Food & Fuel Enterprise Co.(SAFFE), making biochar from rice hull and bamboo, and organic plant nutrient.

Rob has conducted a wide range of agricultural trials in pots and farms, using biochar, organic foliar feeds and nutrients, and continually posts photos, videos and information to share his invaluable research with everyone in the academic area and general public. His openly shared information at a time when few scientists divulge results before publication is a testimony to his enthusiasm and dedication to averting climate change and mitigating global warming.

However, perhaps Robert's most impressive invention is a tabletop charcoal-maker, which also is a single-burner cookstove. Now, climate-conscious housewives can proudly have a carbon negative kitchen to capture carbon with every meal and pot of tea. A wide variety of fibrous organic matter—cornstalks, nut shells, bamboo, wood chips, straw—can be stacked in the box, then ignited at the burner. The stove can be reloaded with more fuel to use for cooking as long as needed. A recent demonstration of the stove with corncobs ran for 25 minutes and boiled 10 liters of water before charcoal remaining was taken out.
Robert presented his work at the first International Agrichar Conference in Terrigal, Australia last April. He questioned the push to develop industrial-scale biochar technology, pointing out a simple stove can be sold to a billion developing world farmers for whom food and fuel shortage are real. Rob demonstrated his stove on the New
South Wales seashore so the world's leading mycologists and biochar advocates toasted marshmallows!

Research into biochar is exciting to read, but to see a small metal box turn biomass into charcoal is real and reassuring. Further, eating food from a carbon-capturing cooker inspires hope and offers a sweet taste of the future! The next stove will run off the grid to use in areas without electricity, such as developing countries, or after natural disasters to sanitize drinking water and cook food.

Rob's research isn’t limited to China. His next journey is to Indonesia, where he is involved in biochar projects with Indonesian government. He will research using biochar, efficient microbes (EM) and animal waste, initiate further field trials, and continue developing the Flanagan Stove.

These days, this wandering Irishman calls New Zealand home—ironically renowned to be 'clean' and green! The immense personal sacrifice he has made, time away from family and loved ones, life savings invested, and tireless effort of seven day weeks for over three years, speak of his commitment, courage, dedication, and persistence in the face of abrupt climate change.