hree Simple design for Demonstrating the Conversion of Woody Materials Into Gaseous, Liquid, and Solid Fuels

The recent interest in retort pyrolysis to produce a low to medium BTU gas and charcoal encouraged me to dig out an illustrated essay I wrote twenty-some years ago. Believing that this might be timely, I am sending this first few pages and their illustrations. The essay in its entiriety exploring about twenty designs is available to anyone who requests it.

The breakdown of wood by heat (pyrolysis) produces a large number of chemical substances. Some of these chemicals can be used as substitutes for conventional fuels. This paper describes several designs for demonstrating the principles of pyrolysis.

While a great deal of popular contemporary literature has been devoted to the fermentation of grain into alcohol and of manure into methane, very little has been written about the use of heat to convert woody materials into comparably attractive fuels. The limited available literature about pyrolysis is usually concerned with single chamber designs which combine the burning of wood and the generation of wood gas in a single combustion-pyrolysis chamber. During World War II, many cars and trucks in Europe ran on wood gas generated in this way by portable wood burner-cookers they carried with them. Performance was less than spectacular due to the low energy value of the gas which usually contained large percentages of nitrogen and other non-combustibles. Engine durability was diminished by very small amounts of unprecipated creosotes and fly-ash carried by the wood gas into the engine.

A variation of one-chambered pyrolysis that promises improved engine performance incorporates a second chamber so that the burning of fuel for heat to drive the process is separated from the wood to be broken down by that heat. In this way, dilution of the wood gas with N2 and CO2 is avoided, resulting in a medium to high BTU gas. Another advantage is found in the ability to recover by distillation a large number of useful liquid chemicals including methanol, acetone, light oils, and creosotes. In addition, a high quality charcoal is produced which can be used as an exceptionally clean and hot burning solid fuel.

The demonstration designs described in this paper are limited to two-chamber configurations. They are relatively unsophisticated and inexpensive to build, as they may be made from readily available off-the-shelf materials.

A good first introduction to wood pyrolysis might be to carefully watch a wood fire progress from cold wood to cold ash. Heating a log causes it to smoke, and if flame is present, the smoke will burn to produce more flame. As the wood heats and gives off combustible gasses, it also shrinks and cracks on the surface, and opens up to permit gasses from the interior to escape. The color changes to black as charring takes place, but the char remains fairly cool until the outgassing has nearly stopped. This is because the boiling of gasses cools the wood in much the same way that water is kept at 212O F by boiling off steam. As outgassing ends, the temperature of the char rises to a red heat. Carbon molecules now vaporize from the surface and combine with oxygen from the air to produce a faint blue-violet halo of flame that closely surrounds the char. Finally, when all of the carbon has been boiled off and oxidized, a small quantity of whitish ash remains.

The gasses that evolve from the heated wood are very complex and contain hundreds of different chemicals. Some of them liquefy when the gas is cooled to room temperature; others do not.

The hot wood gasses are more easily examined if they can be kept separate from the combustion gasses of the fire. This can be done by cooking a small quantity of wood in a test tube, and then cooling those gasses as they pass through a water bath (Figure 1). Cooling causes the creosotes, light oils, water vapor, methanol, and many other chemicals to drop out of the gas. What remains is largely CO with small percentages of H2, CH4, CO2, N2 and various other gasses that give it a very pungent odor. It burns with a pale blue flame, producing largely CO2.

If larger quantities of gas are desired, a small generator can be made from a short piece of pipe, copper tubing, and a few fittings (Figure II). If the pipe is loaded with splints of wood, capped and heated strongly, a dense white gas will begin to come from the tube end. At first it is largely water vapor and will not burn, but as outgassing progresses, it will burn if introduced into a strong flame. At a still later stage, the gas will hold a flame when ignited, and burn with a pale blue color. When further heating produces no more gas, charring is complete and the unit can be cooled, emptied, and reloaded.

A more sophisticated version of this design could be installed in a heating stove (figure III). The sawdust is fed from a reservoir at one end by an auger inside the pipe. Charcoal exits from the other end. The wood gas should be collected from the hottest portion of the pipe. Of course, only a small amount of gas can be generated at one time, but the produce from several batches can be collected and stored in an inner tube. This will cool the gas and cause it to drop much of its load of liquids and so generally improve the BTU quality of the gas. These simple designs are quite useful for generating quantities of gas large enough for testing and demonstration purposes.

Note- this comprises the first portion of a paper describing moderately inexpensive pyrolysis designs that could be built and operated by small industries, sawmills or farms. For a copy of the entire article, contact Richard Boyt at rdboyt@yahoo.com. 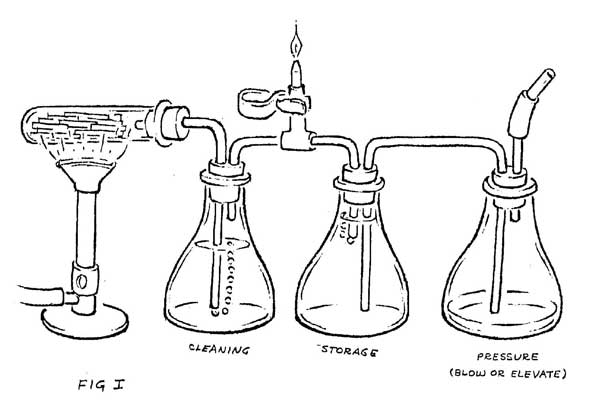 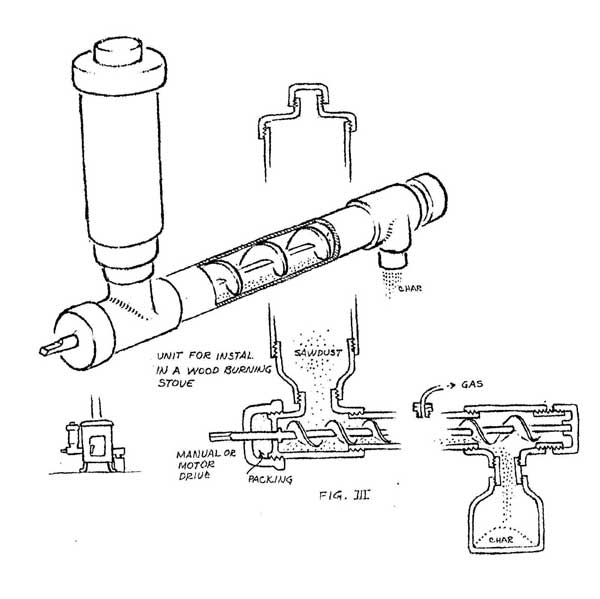