Summary of one afternoon of tests done on a down draft wood boiler.

The testing was done with the boiler induced draft fan running constantly. It normally cycles to meet demand. The fuel was unseasoned Red Maple slab wood.

The first test started with the wood which had been loaded four hours before. Half way through this one hour test, wood was added. This appears to cause a significant improvement in combustion. The reduced excess air levels coupled with the higher stack temperatures suggest a high rate of burn. There was no visible emissions during this entire test. The total particulate emission rate for this test was approximately 1.4g/kg of wood. The filter deposit is dark brown. 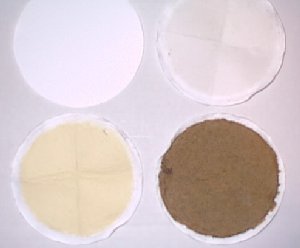 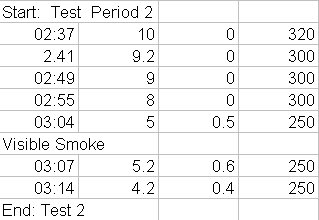 The second test begins with good combustion and ends with a smoky period. The smoky period coincides with an increase of excess air and CO levels. During this period there was a rapid loading of the filter as noted by the need to increase suction to maintain a constant sample flow rate. A look at the fire box after the test showed large spaces between the pieces of wood, with smoke being drawn down through. The filter has a similar brown appearance. 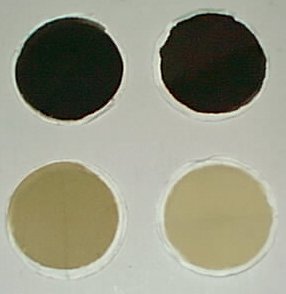 The third test was manipulated to avoid sampling during a period of poorer combustion. As with the second test a period of excess air developed due to the development of spaces in the fuel pile. This was corrected by poking the fire. No visible stack emissions during the sampling period. The fresh filter deposit was a pale yellow in sun light. (Bottom left) The emissions rate was approximately 1g/kg. 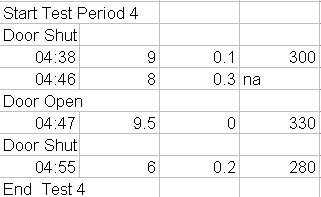 The fourth test was also manipulated to see if changing the air entry point would have an effect on CO/CO2 levels. Nothing conclusive was observed. The test was short with no large spaces developing. Observations were similar to test #3. Filter picture (bottom right) The emissions rate was also 1g/kg.

During all of these tests the filter temperature was maintained just below 100F.

None of these tests showed CO/CO2 numbers as good as those measured during a "manipulated" test back in December, with different fuel wood, when the emissions rate was about 0.7g/kg. So far all of the measurements have fit reasonably with the observations.

It apears to me, albeit with meeger quantities of data, as though there is a somewhat fine line between smoky opperation and "smokeless" opperation. This line occures higher up in the range of CO/CO2 ratios than I would have expected. It should be noted that this burner runs on induced draft from an ejector fan arrangement which dilutes the visible stack emissions by three parts fresh air for one part flue gas. Thus it will always look better than another stove with the same undiluted emissions. The sampling data was collected in the undiluted portion of the chimney.

The following are two pictures of the home made "Condar" styled dilution tunnel emissions sampler.