Seachr: A one week update from the field. 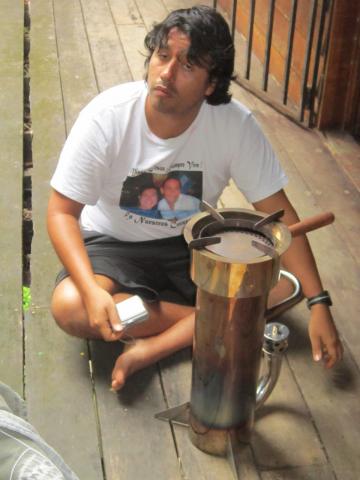 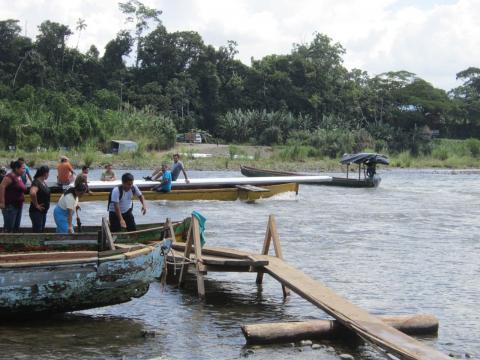 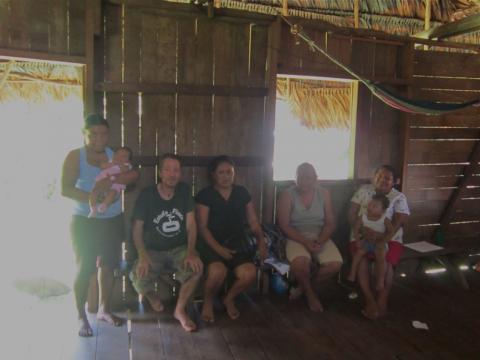 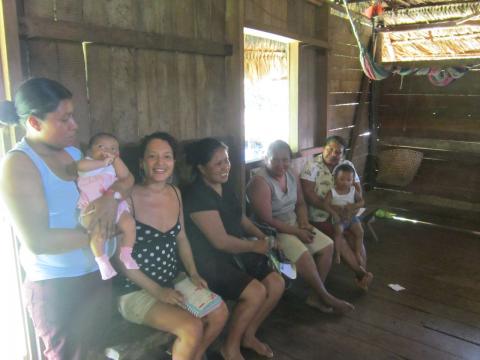 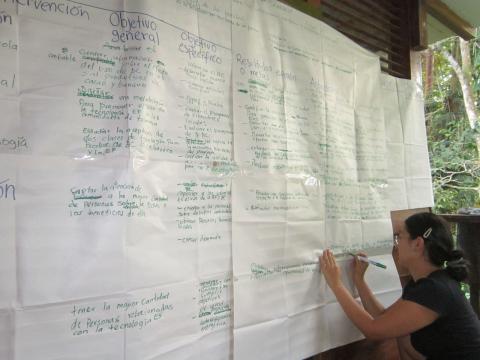 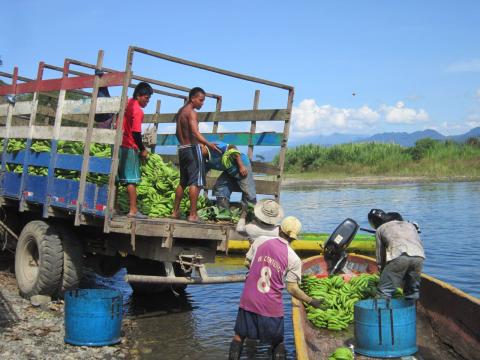 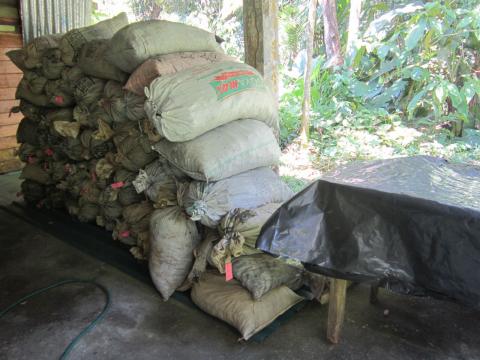 I have reported to many of you how fun and successful my cooking demonstration with Dr. Paul
Olivier's rusk husk burning TLUD was on my 1st day back in San Jose. My thanks again to friend and frequent SeaChar volunteer Birgit Lendernick for hosting and organizing that. So fun, great food, great conversations and the stove's clean blue flame impressed everyone there
It has been an absolutely exhilarating ten days, since my MEPE bus rolled into Puerto Viejo. Yesterday E.F. promoter, Thierry Mangel and I conducted a biochar buy-back day in the Bribri communities of Amubri, Suiri and Sueretka. We worked closely with the organizers in each community and although it involved lifting and transferring approx. 1200 lbs of biochar from homes to truck, to boat, back to truck and then off-loading. It went great, everyone coordinated well. After stopping at APPTA to pick up the last 10 sacks of biochar that we had inventoried there. We off-loaded and dry stored 565 kilograms in 54 sacks. This gives us enough to meet the order which we have received from a researcher at CORBANA. http://translate.google.com/translate?hl=en&sl=es&u=http://www.corbana.c...

CORBANA is the research and farmer education arm of the Costa Rican Banana industry. They have one of the most sophisticated soil testing laboratories in the country. They will be initiating a three year long controlled study program evaluating the use of biochar on banana cultivation and field practices. This will be the 1st of several orders as this program gets underway. We will enjoy full access to the data from the project as this very important relationship develops. As I have said recently I am not so impressed with how much more biochar we have been selling this year as I am by how influential some of the parties buying it are.

Not long ago a woman we are working with in Amubri told Laura that due to deforestation from banana production and timber harvesting, children were growing up in the Talamanca Valley not knowing what a monkey looks like. Like the clear cuts in Oregon, the reality of the scale and scope of the negative impact is shielded from the eyes of the casual visitor by a screen of trees along the roads. The reality for people who evolved a sophisticated culture based on the rich forests around them is deep and complex, but it expresses self with the blunt force of steams drying-up, that people relied on for drinking water. The impact of heavy agro-chemical use impacts the community's well-being in other ways. The conversation I am relating, occurred on July 31st at a Estufa Finca community meeting in Amubri. The meeting was organized by Laura Roldan, Thierry Mangel and Don Valencio Engelsais to ask the community what they would like to do next with the ideas we introduced in the 1st Phase of the Estufa Finca Project.

The community told Laura they wanted support to organize a local business collecting, preparing and packaging Estufa Finca Biochar. Laura has developed a Brand name and logo for this high quality biochar: Joya de Talamamanca BioCarbon. By community decision this biochar will come only from cook stoves and that story will be a powerful part of our marketing campaign. The timing of this could not have been better, by the time of the August 10th follow-up meeting we had received an inquiry from a Rural Economic Development Program from the National University of Costa Rica. Due to Laura's connection to one of the Professors working with this program, we were asked if we had a community with entrepreneurial potential. This is an area where most households get by on $80-$120 a month. We had their match. The group has a seven member organizing committee of 6 women and one man, as well as 23 registered volunteers. On August 24th approx 30 community members, two Professors from UNA and the Estufa Finca Team met to begin this process. The "homework" for the community members was to create a name and mission statement. The Amubri group has named itself "We Indigenous Working With Biochar" It looks a lot cooler in Bribri, but I do not have the right font.Their mission is : "To use a biochar business to improve the economic, environmental and heath outcomes in the community." Beyond the naming of what will be a registered cooperative business, the first and most pressing need: this community needs new stoves, both to replace their own and to sell. Materials have been ordered and 50 stoves will be built in Amubri during a three-day workshop scheduled for early October. From the volunteer pool 2-3 interns will be selected to head up the creation of a local workshop to build stoves.

We have the next meeting scheduled for September 12th. I can not wait to be there. I think that the Professors from UNA will be amazed at how far beyond that assignment these folks have gone. Subsequent to the last meeting Laura shared a funding opportunity with Maria Hernandez, the leader of the Amubri group. This is a $5000 grant from the International Fund for Indigenous Women. Laura asked Maria to develop a proposal related to their business development. What she and several other organizers presented us with was a beautiful surprise. They have proposed a request for funding for the construction of a tree-nursery and the cultivation and distribution of 1500 tree starts the 1st year, which would be used to improve tree cover and ensure a sustainable source of fuel for the Estufa Finca stoves. Their proposal includes funding for a payed inspector/extension agent, to increase the survival rate of the stars. Starting with a meeting on the 4th of August, Laura and I have worked with them to edit and estimate expenses for this proposal. It asks for $5000 and commits over $3000 in in-kind community support. The proposal is so thoughtful and targeted that it is very powerful. Laura and I plan to translate it so that it can be shared with all of you. This proposal will be submitted tomorrow. I will of course update you on the outcome.

Both of the pieces of news above signal the Estufa Finca Projects transition from Phase One activity, begun in Sept of 2011 to the Project's second Phase. Both are also examples of what we as a team have been so successful at, which is leveraging our small budget and resources by collaboration to create a larger impact. To use our resources to support and catalyze activity that is self-sustaining.

Of course winding up Phase One means taking all the lessons we have learned and data we have collected over the past two years and summarizing it in a Report, which we are preparing for National Geographic's Great Energy Challenge. Laura and I, plan to have that report written by the end of October. We are currently working with Lorena Calderon, a Masters candidate from CATIE on a close-out survey and interview process for project stake-holders, this is meant to inform the goals and methods we will adopt for Phase Two.

Lorena has also been leading our team including CATIE researcher Jorge Buitrago through a series of workshops aimed at deconstructing and evaluating the the past several years of history and activity. It has been and invaluable process. Although we will include some of Lorena's data in the National Geographic Report. However like the results of Jorge's cacao and banana/ biochar trials; Lorena's full report on the history of the Estufa Finca-Talamanca Project will appear as her Masters Thesis and will be available early in 2014. Jorge is currently collecting the last round of soil samples for this years round of on-farm cacao plot tests. We hope to see measurable changes, but I am most eagerly awaiting the results of Jorge's ambitious green-house banana/biochar trails. I look forward to sharing all this information with you. Jorge has also been a tireless net-worker and promoter on our behalf. Check out his great blog on Biochar and EM in Costa Rica: http://agriculturadelavida.org/biocarbon-costa-rica-2012/

...
Everyday this week is going to produce new developments. I'll try to keep you updated. This project is rolling.
Thank you all for your support,