We are making some progress on the Juntos stove. 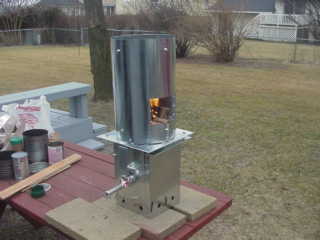 Yes, I do have a two-stage fire (or 2-level fire) or fires on each of 2 levels. Or maybe even could be called three (3) levels: 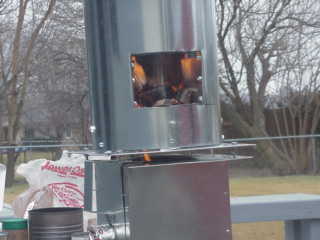 The lower level is the gasifier that has the gas production via a glowing fire at the bottom and also the burning of the gasses about 2 to 4 inches (10 cm) above, that is where the flame is found. (could be called 2 fires, but I think of it as one gasifier unit in which the gasses are generated in one place and shortly thereafter are burned in another place.).

Above all of that is the modified "Rocket" stove, which has no bottom (just a grate to hold fuel) so that the gasifier fire(s) burn right up into it.

There is almost no smoke associated with the gasifier.

I had the gasifier working for about 3 - 5 minutes before lighting the Rocket unit. The Rocket unit was loaded with 2 small briquettes (one from Crispin in Swaziland and one from Apolinario in Mozambique) plus a couple minor wood pieces (and I set the blaze with a 20 x 20 cm piece of newspaper). When I lit the paper, the Rocket started to blaze almost immediately, with less than 15 seconds of rather minor smoke, and there was no noticeable smoke for the remainder of the burn.

During this burn, my small charge (one "tuna fish can") of initial gasifier fuel (pellets) was consumed in about 10 -15 minutes except to leave charcoal. I saved the charcoal, reloaded the gasifier with the same amount, lit it with my "secret" lighting compound (Shhhhh... do not tell anyone that it is wood shavings mixed with sawdust and then dampened with "torch fuel" like citronella or kerosene (and I will try meat grease someday). :-))

The re-lit gasifier was re-inserted under the still-burning Rocket stove and a great fire was had by all.

I then inserted a full-size (Legacy style) briquette with a hole in the center, place vertically in the Rocket chamber. This briquette had about 50 - 70% charcoal fines in it, rest was paper pulp as binder, made in Mozambique. It burned very well, but I feel that the gasifier under it was needed. Also, there were little "sparky-pops" that occurred, I believe because the charcoal fines had been soaked in the watery mush that was used to make the briquette.

The pictures are of a sheet-metal unit made by a metal-worker here. It cost us about $150. A bargain, and a high price at the same time. The bargain is that it is pretty, and impresses people, and shows potential. High price because it really did NOT do much more that the previously "wired together" tincanium first Juntos stove that recently reappeared in the message from Tom Read about putting pictures inside our e-mail.

It burns with a steady, moderate combustion that is altered in the following ways:

a. I can cut back on the primary air and thereby slow the pyrolyic gasification of the base fuel to try to slow the flaming of the gasses at the top of the gasifier.

b. I currently do not attempt to reduce the secondary air into the top of the gasifier.

c. The second fire (Rocket) above will increase the drawing of air at all three levels:

2. Secondary air to then burn those gasses in the upper part of the gasifier

3. All air (primary and secondary) into the Rocket area for combustion of the fuel there.

d. The amount of air into the Rocket area is not controlled (yet) by me, but could be controlled via:

1. tighter fit between the gasifier and the Rocket.

2. air entry via the side-load hole on the Rocket, that could be partially closed with a door or other control.

But if too tight a fit, the draw via the secondary air of the gasifier might increase too much, or even pull extra primary air via the air pipe, which would accelerate the fire.Nike Air Force 1 07 Premium Just Do It AR7719-100 Shoes – Buy Best Price Adidas&Nike Sport Sneakers