For pictures of the original, See Sweet 16, the student TLUD

The design of the two can Sweet 16 TLUD has evolved a bit. No more bricks. Added a focusing plate.

This configuration of the two can Sweet 16 went 97 minutes on just 1.4 lbs (635 grams) of wood pellet fuel in its one quart burn pot.
47% of the initial 850 ml of water was evaporated. The water never quite boiled. Tomorrow, I will get the weight of the biochar made in this burn. 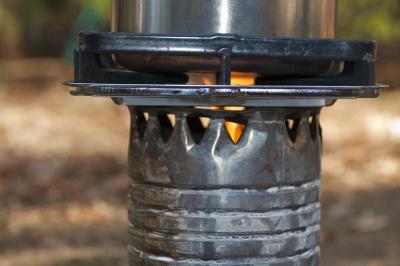 A $3.00 GE Gas Grease Pan sits directly on top of the outer coffee can as a 'focusing' plate. On top of that is an inverted gas grate - used. On top of that is a Revereware pot with 850 ML of ambient temp water in it. About 10C. At first, I had both the pan and the grate inverted, but this appears to put the pot too close to the top of the coffee can and there was some smoking -- not much. So I put the Grease Pan right side up, but left the grate inverted. Solved the problem. 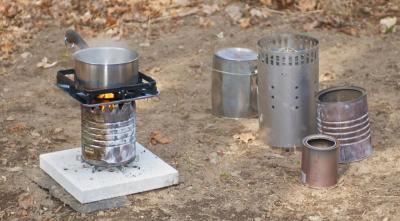 TLUDs. On the left, the single stage, two can, Sweet 16 is cranking away. Its outer Costco 3 lbs coffee can, when inverted, is the second stage outer can of the two stage P80 TLUD. To the right are: 1 gallon quenching can; Weber charcoal starter - inverted - used as the outer can for the first stage of the P90; a 3 lbs Costco coffee can used as the burn pot of the P90; and the open ended one quart can used as a focusing can in the second stage of the P90. In the P90, the burn pot sits inside the Weber. These two cans form the first stage. Note: In the P90, the both cans of the second stage rest on top of the basket rings of the Weber.