Drawing and Pictures of the arrangement used to turn a drum full of dry wood into charcoal while burning off the noxious gasses.

This afternoon I tested a scaled up version of the venturi burner.
The idea being to produce charcoal on a "viable" scale without the
high production of polluting gasses.

Much of this chimney flare was built out of heavy steel because that is what was available. There is no reason why the whole chimney couldn't be made out of sheet metal stove pipe. 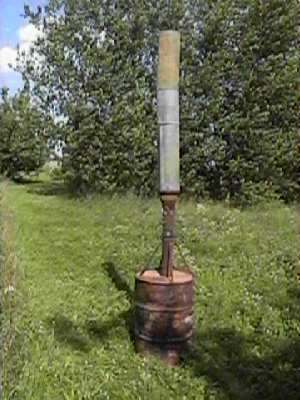 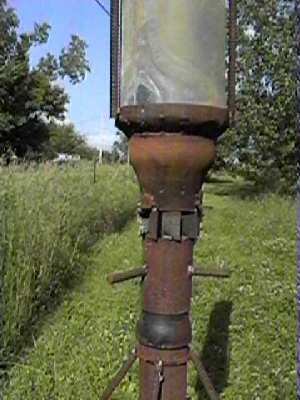 Note the tangential fins which act as guides for the secondary air.
These induce the vortex which premixes the smoky gasses from
pyrolysis, which I believe already has some unreacted oxygen with it,
with some additional air, to form a highly combustible mix. These
can be individually plugged to get the right quantity of air. A flame
introduced through one of these openings will ignite the mix which,
if all goes well, will be self sustaining in the chimney above.

A 200 litre drum was packed with cedar slab wood from my sawmill. Most
of it less than 5 cm thick, and at about 12% moisture, dry basis , I
think. My meter consistently gives this reading for air dried lumber,
under cover in this region.

The top was sprinkled with kindling and lit. The three primary
air holes were plugged. It burned in the open, with no lid,
for five minutes. I spread the burning kindling around to try and get
the entire surface burning. The primary air holes were unplugged and
the lid and chimney assembly were erected.

This consists of a short 60 cm tall , 9 cm dia. pipe which draws
the pyrolysis gasses out of the drum, and a 150 cm tall, 20cm. dia.
chimney which draws additional air through a tangential air supply at
the top of the short chimney.

A pilot flame, inserted through the tangential secondary air vents,
was required for the first five or ten minutes to maintain the
combustion of the gasses in the upper chimney. The secondary air
supply was adjusted by plugging the air openings with insulation, to
achieve the loudest roar of the flame. This seems to be the setting
which offers the greatest reliability for maintaining the flame. Gas
production and composition varies somewhat over the course of the
burn and some adjustment seems necessary. The burn lasted three
hours until no flame or smoke was evident. I should have shut it
down a bit sooner as some of the charcoal was consumed. The top
chimney was removed and a plug placed in the remaining short
chimney. The three primary hole were also plugged. It all cooled down
in an hour and a half.

The charcoal looks good. To bad it isn't hardwood.

This device had a heat output in the range of 200,000btus/hr for three hours. We ought to be able to use that for something useful.تخفيضات