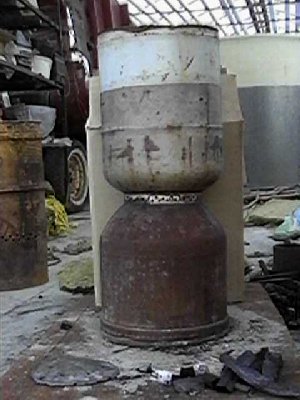 I used the cutoff milk can as the base pyrolyser. The same as with my last venturi trial. It is 30cm in diameter with the top tapering in to a 20cm opening. A 20pound propane tank with the bottom( inside of the 21cm diameter stand), and the top, cut out, served as the combustion chamber/ chimney. The 21cm dia. ring stand, which is about 2cm tall, was drilled with about 70-6mm secondary air holes. The tank is also about 30cm in diameter through its cylindrical portion. The rounded top was cut off.

During normal operation ( with no bluff bodies or obstructions) the flame attachment was as good as I have seen. The gasses burned vigorously in the throat, about 10-14cm above the fuel.

Then the piece of the propane tank which was cut out ( a 20cm disc) was lowered down to the opening to obstruct the flow. I was astonished to see that the flames shot out horizontally around the disc towards the out side of the chimney. I had expected it to snuff the flames or at least cause an increase in smoke, but it did not.

While messing around with the disc it accidentally dropped through to below the secondary air throat. Now the gasses were being forced to flow right up into the secondary air jets. The flames shot towards the centre with excellent attachment and stability. 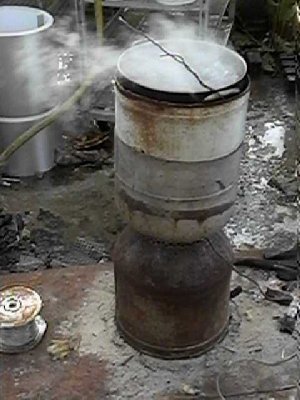 The following three picture were taken during one of the tests previous to the one decribed below.

Losses due to start up (10 min) and 'surface loss' must account for around 57%. Please challenge these numbers, I don't do this every day.

The stove had an insulated cylindrical combustion chamber 20cm dia by 15cm tall. On top of this was a metal cross which supported the pot 3cm higher. The pot was about 20 cm above the secondary air holes. The rate of boiling could be described as steady, neither a simmer nor a roar. The primary air was open a tad, with ta slight increase neer the end. Opening it more resulted in a little smoke, likely due to impingment on the bottom of the pot. Cutting primary air down resulted in poor attachment with loss of flame. No flame holding devices were used during this test. A previous test used a baffle plate below the secondary air holes. This arrangement was more tollerant of primary air adjustment.

Combustion chamber temperatures stayed around 1050 F, declining toward the end of the burn. Temperatures at the top of the fuel started at around 750 F and rose slowly during the burn to a high of 1200F at the end. 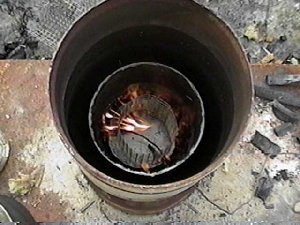 This shows the combustion chamber with the baffle and a useless mixing screen. 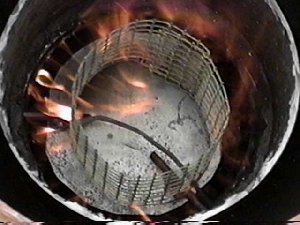