My lastest results with the pellet pyrolyser show the remarkable consistancy of top-down pyrolysis as a meathod for metering fuel for combustion. Below is a graph of temperatures datalogged during the latter two thirds, or "handsoff with fans portion"of a test run of the Bigtop burner. The first third was will be discussed further down.

The three measured points include;

The flame temperature plot shows the absolutely consistant rate of heat production from combustion of the gasses until about 20:10 PM when the pyrolysis front reaches the bottom of the fuel load and the fuel's volatile component is exhausted. At this point gasification of the remaining char sustains a flame of lower total heat output. At around 21:35 PM, loss of flame occurs, followed shortly by a shut down of all air supplies.

The pyrolysis gas temperature plot shows a slow decline until about 20:10 PM due to the increased transit time of the gas between the dropping pyrolysis zone and the burner.

The pellet temperature plot shows a swift climb as the pyrolysis zone moves slowly down through the fuel pile and then a slow decline as the distance between that zone and the thermocouple increases. At about 18:40 PM the rate of decline increases. This is likely due to the thermocouple becoming unburried due to the shrinking of the total fuel load.

The following graph show the flame and pyrolysis gas temperature profile during the first part of the same test run when I was manipulating the air supply. Steep vertical changes in the pink flame temperature represent loss of flame in the burner. This is due to my actions, not to instability of the process. My actions included removing various fans and pipes to allow for higher and lower flow rates.

Most noteably, the time between 14:45 PM and 15:50 PM, all fans were removed and the burner was allowed to run "handsoff and no fans" on natural draft forces alone.

This is a picture of the Bigtop burner on the day of this test. 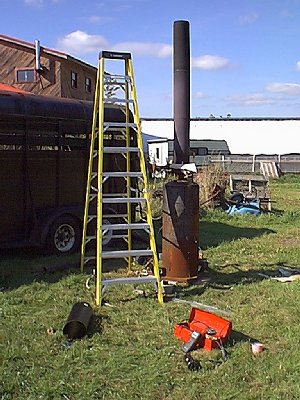