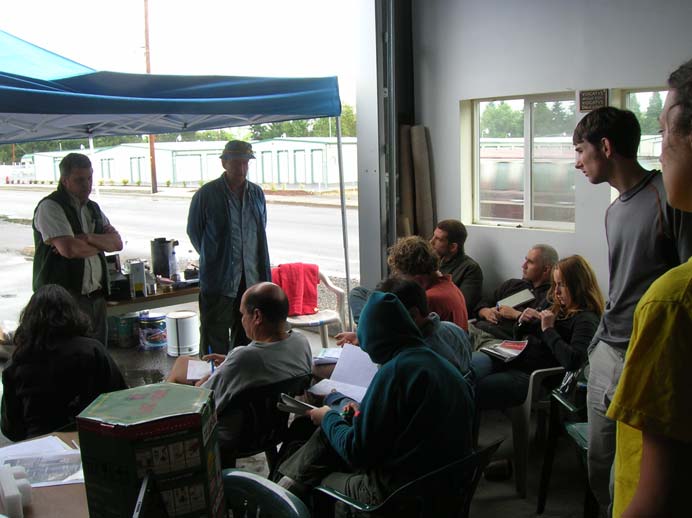 A good time was had by all as we camped, cooked lunch on wood burning stoves, shared information, and built and tested stoves. This year was a bit different because we did classes every day for most of the participants. I hope that folks went away feeling better informed.

I learned a lot from Dale Andreatta about heat transfer and thought that the group succeeded in writing up a more effective Controlled Cooking Test. Chris Roden and Nordica shared up to the minute Global Warming data. It was interesting to help folks design stoves for their applications. It is always a pleasure to see Paul Anderson’s enthusiasm for T-LUD’s! I think that his continual feed T-LUD shows a lot of promise.

This year the continual flow of classes replaced a lot of the stove development and testing. In fact, we decided not to award the 2nd Annual Cat Pee Award since there were few contestants. Three stoves were tested under the PEMS and the results are seen in the table below:

Tom Miles happened to be in the lab when the THING was being tested. The THING is an adjustable skirt surrounding a pot (11mm gap) that only allows air to enter into the combustion zone through the one fuel entrance. The pot sits on top of a separate pot support inside the skirt. The sticks burn relatively slowly at the tips. The small gap between the skirt and the pot diminishes primary air compared to the Rocket stove. As can be seen from these single tests the THING made a relatively small amount of PM but was higher than the TLUD on CO.

We are continuing to experiment with what we now view as a continuum from gasifier to Rocket with the THING somewhere in the middle.

Stove Camp Pictures, click on each image for more detail.

Setting up a simple mold

Ernestine and Paul cook on the TLUD

Replacing the TLUD burner with a new one

Adjusting air on the TLUD burner